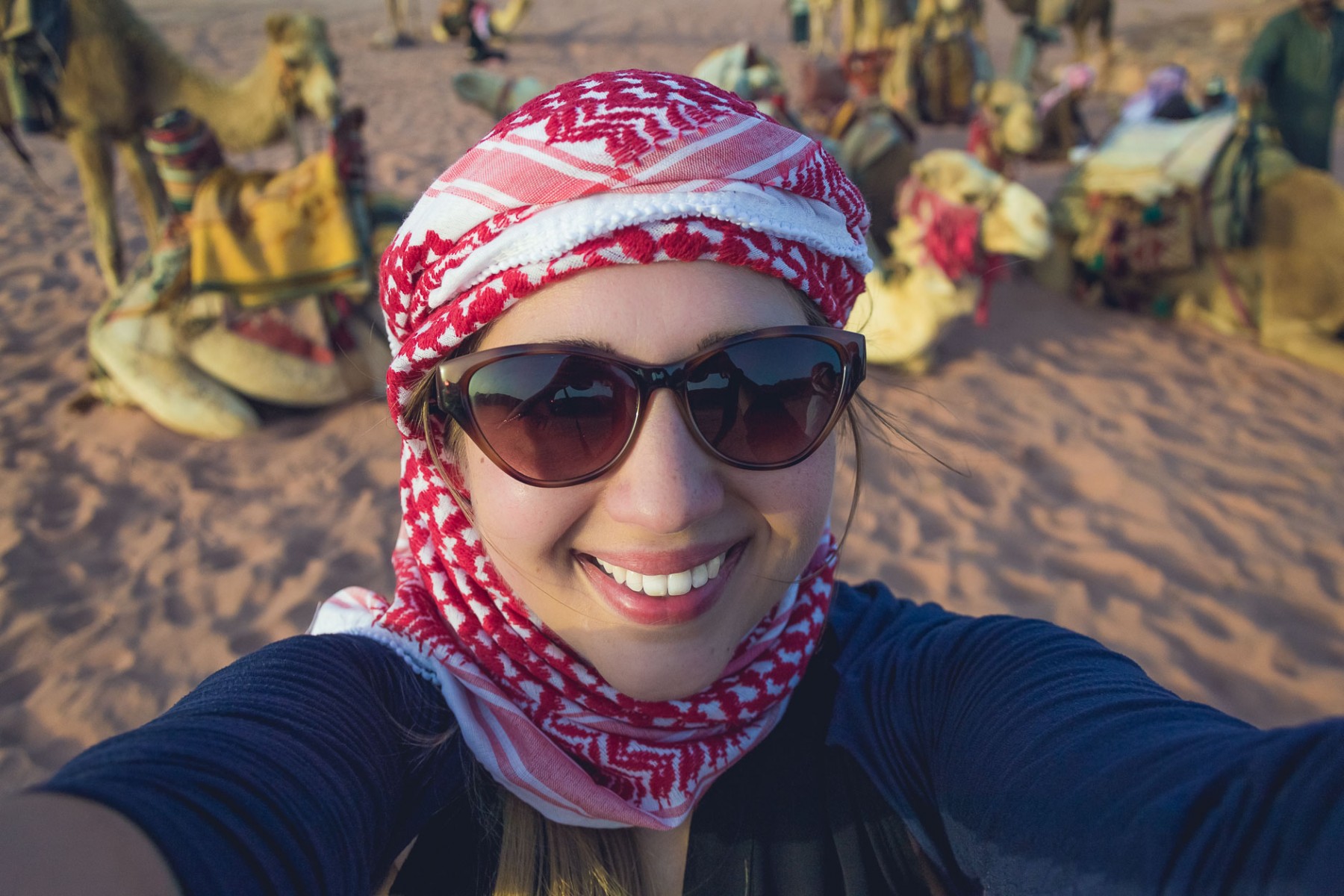 April was a rollercoaster ride kind of month: From weather to emotional states, there was just plenty going on this month for me. There were many ups and some downs, but mainly: There was spring! The month had actually started off with a giant April fools’ brought to Germany by the weather in Central Europe: Snow! And not just a little sleet, but the actual white stuff that sticks.

Only two days later though, I landed in the Middle East for a glorious week of Mediterranean spring sunshine and desert heat by the Red Sea. When I returned, Germany was still grey and gloomy, but spring came all of a sudden and I was reminded how much better everything is when cherry blossoms are involved.

But spring also always means a lot of stuff going on at work, so I rarely found the time to really enjoy the weather properly yet: There were times I felt like I’m currently trying to juggle three jobs at once — but it still helps immensely to see blue skies when looking up from the screen.

April was the most exciting travel month in 2015 thus far — and I probably won’t go on a trip as thrilling and eye-opening anytime soon: I was in Jordan for a week and it was incredible! I learned so much about myself, about life but also about history and culture in general in Jordan. It was my first time in this region of the world, and I began to understand that a European niche might be suitable for my blog, but I as a person I want more than just Europe. I learned that I want more than this provincial (European) life, but I need to find a balance of work, my grown-up life (career?), and travel that works for me. I know, I’ve written about this a lot before, but traveling with three blogger girls who are experienced in freelancing and being digital nomads was inspiring in many ways. We spent hours sitting on hotel room floors together editing photos and discussing life, and I can’t deny that these discussions had an impact on me and what I want in life. Being part of a big blogging campaign absolutely reaffirmed my love for blogging, because it made me feel like my writing and photography is worth something. This little corner of the internet can actually make a difference and people really believe it can.

The goal of our #GirlsGoneJordan campaign was to prove that Jordan is a wonderful and safe travel destination for girls like us, and it’s amazing to see how the online world reacted to our work: While we were in Jordan we created almost 1,500,000 impressions on Twitter and we are so thankful for everyone who supported us with shares and retweets!

We are hoping that our blog posts (more to come soon!) will do just as well spreading that word that Jordan is a wonderful travel destination. Still though: Being on a press trip was the most comfortable way I ever traveled, and it’s a challenge not to write an entire post about how much I loved this sunset view of Amman from my 5 star hotel room at the Sheraton.

I’m convinced that we got to experience the Jordan that lies beyond the heavy curtains of those fancy hotels, but I found it important to state that there were some elements that I usually wouldn’t encounter when traveling independently: Super fancy hotels, restaurants with real napkins, and even a spa. (I had never even been to a spa before, and considering my usual travel style and blog niche, I don’t think I could ever write about this experience. Okay, maybe I could write about being stupid and cutting my toe open creating a little bloodbath drama while getting out of a jacuzzi.) Most importantly, I wanted to be absolutely honest and upfront about that pretty much everything the girls and I did in Jordan was comped, but the fact that I fell in truly love with the country (and became curious to see more of this region) has nothing to do with those amenities, but with the people, the food, the scenery, and the camels. Through our campaign, I learned that this blog is good enough to have big goals and to work with international brands and tourism boards. I want to keep blogging and go to the next level with this blog, but I won’t be at TBEX this year nonetheless. Even though Costa Brava is only a short flight from where I live in Germany, and one of the conference days even is a public holiday here, I’m not going, because I don’t want to spend money on things that don’t take me further right now.

I’ve attended enough blogging events to understand that the keynotes are all pretty similar at some point, and I don’t want to write the same photo essay blog posts about Girona that 300 other bloggers will write in the next months. That’s why I purposely booked a trip somewhere else for the upcoming TBEX weekend — so that I can enjoy traveling without any social media obligations and blogger peer pressure, but also so I don’t start regretting my decision once the party photos go viral, because I’m obviously sad about missing out on some crazy nights in Spain with all my favorite blogger people.
(If you’re going to be at TBEX Costa Brava though: Make sure to attend my friend Nienke‘s session — she’s a Pinterest genius and I promise you’ll learn so much!)

Of course, trying coffee in Jordan was my main coffee agenda this month, but I won’t be giving too much away yet, because I have an entire blog post about coffee in Jordan coming up soon. But as a part of my everlasting project to find beauty in my everyday life as well, I also had a few nice coffees at home in Germany. My favorite this April: Drinking cappuccinos with a travel-addicted friend who currently lives in Central Asia (and thus has so many interesting stories to tell)! Also, we were totally scheming up a meet-up in Paris this summer! Reading on my desk is basically my main occupation as an art historian and sadly, it’s not exciting or photo-worthy at all. As much as I would want my academia life to be more like an Indiana Jones movie, most of the time it’s just books, copies of books, and researching artifacts online.

I’ve been trying to explore a new medieval church or a new museum each month this year to keep myself inspired, but it’s not always that easy. Luckily I was in Jordan this month, and yes, there is quite a bit of medieval architecture to be found there! And I got a fabulously inspiring middle ages fix for this month! Ajlun Castle in the north of Jordan dates back to the late 12the century when it was built as a strategic fortress by the nephew of the famous Saladin as a part of a defensive chain of Arab castles to keep the crusaders from moving further south. Because it is situated on a hill overlooking much of Northern Jordan and also right in-between Cairo and Damascus, the castle was used for beacon fires and as a “pigeon post office” in the following decades. The crusaders never stood a chance against Ajlun Castle, but in the late 13th century, the Mongol invaders actually conquered the castle and destroyed much of it.

Since then it was rebuilt and served as a Ottoman garrison before Johann Ludwig Burckhardt, the famous Swiss traveler and orientalist who found Petra (and who went to university in my current German home town!!), rediscovered the castle as a place of interest in the early 19th century. Several earthquakes destroyed bigger parts of the castle, but the interior is still quite impressive to visit.

For me, it was absolutely fascinating to see that although this castle was built to fight against European warriors, the Arab castle architecture very much resembled many of the castles I’ve visited in Europe. I loved learning more about medieval history in Jordan here and I once again realized how little I knew (and still know) about history in this part of the world (and that the history taught in schools and universities is just way too Eurocentric!). I’m absolutely inspired to do more reading on this! Let’s just say: Everything. Is. So. Much. Better. In. The. Spring! Seriously, it makes such a difference to wake up to sunlight and the sound of singing birds. And it not only affects me: Every person in Germany is nicer once the winter’s officially over! So I hope you forgive for photographing way too many cherry, apple, and magnolia blossoms this April — I was just so excited for them! Photography can be depressing sometimes. I know I don’t suck as a photographer, but every time I think I finally understood something and the image looks nice on the camera screen, I look at that same photo on my computer and I’m reminded that I’m nowhere near “there yet”. There is just so much to be improved still. I don’t want to humblebrag or fish for compliments: Photography just has a way of teaching you modesty. When a photo doesn’t work out like I want it to work out, it’s my fault 90% of the time. But I can’t help blaming those other 10%, my gear: My camera is a really old, really basic one and I think I’ve reached a point where I can’t take it anymore: I can’t even take more than five photos on in a row before it stops focussing entirely and I have to remove the battery to reactivate it — definitely not ideal when you want to be fast to capture fleeting moments!

Thus my biggest goal for the next months is: Practice as much as possible and save every cent to upgrade to a full-frame body as soon as possible. The body I have my eyes on costs about 2,300 Euros and it might take me years to save up for this, but I’ve started to think about making money with affiliate links on this blog in the future. I’m still not a fan the thought of monetizing my blog, I still don’t like Amazon (and I still don’t even have an Amazon account), and I know I won’t make more than a couple of cents per month, but I want to improve my photography a lot and I just need to make it happen — slowly, but steadily.

Granted, I was a little surprised that none of my Jordan Instagram photos became my most liked image this month, but than again — I get it: I was so excited that spring finally came to Germany and those few days of pink magnolia tree are really insanely beautiful. Coming up in May

Spring in Germany, several public holidays, and more travel: I’m leaving for a new country tomorrow already! Best part: I’ll be traveling with absolutely no itinerary, no guide book, and no plans — but with my favorite guy! Steffen and I haven’t been on a trip together in forever and I’m excited for two (!) extended travel weekends this month. Interestingly enough: Both destinations start with an “L”! Follow along on Instagram to see where we are headed!

What were your spring-time highlights this April?