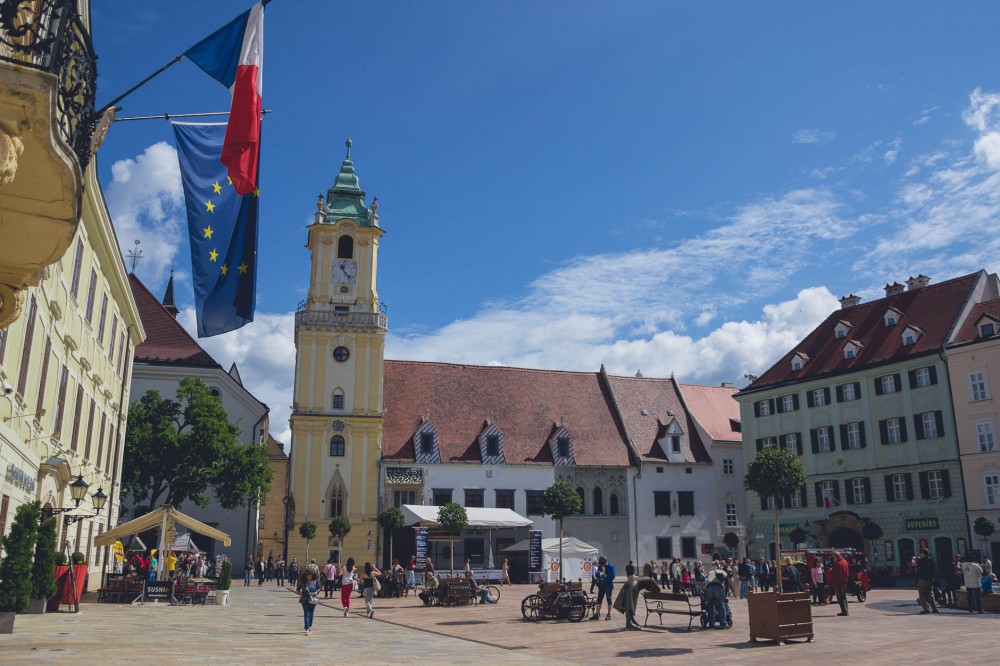 On one Sunday evening during the chaotic months of early summer, I just booked a cheap flight to Vienna. I wasn’t even sure I was actually going, but I needed something to look forward to during the stressful weeks that lay ahead of me then. Up until a week before my flight I wasn’t really sure that I’d actually be on that plane. Work had been crazy, money had been tight.

But then one morning while brushing my teeth I remembered something I once learned in a random quiz: Which are the two closest capitals in Europe? Vienna and Bratislava.

The capitals of Austria and Slovakia are actually only about 50 kilometers apart. And it suddenly hit me that the somewhat desperate booking of a flight to Vienna actually gave me the chance of visiting two new countries in one extended weekend!

I immediately got online and started researching if there was any way to get from Vienna to Bratislava on the cheap for a day — and it didn’t take me long to find the answer: Yes! There is a regular train going from the Austrian to the Slovakian capital taking about an hour. I was excited! There is little I like better than traveling to a European country by train!

And the cost of this little adventure? I basically had to rub my eyes when I saw how much I was going to pay for spending a day in another country: 15 Euros. For the return ticket. Including public transport in Bratislava for the day.

It was settled: I was definitely going to be on that plane and I was doing two capitals in one weekend! I know, I had sworn to aim for a deeper travel experience than just visiting capitals and I never wanted to become a country-counter. But this opportunity was just too good to let it slip! I took the train from Vienna to Bratislava on a sunny August morning and I justified my capital-hopping with the train ride across the Austrian and Slovakian countryside, which I carefully watched rushing past my window.

I had briefly looked at an Eastern Europe guide book I had found in my hostel’s common room during breakfast that morning, but when I stepped of the train I realized that I had actually no clue where to go. Luckily there was a guy giving out maps and handy advice in the station, so I quickly found myself on a bus to the old city center.

I grabbed a window seat (of course) and started marveling at the pretty architecture and signs with a new language, when the elderly Slovakian lady who sat next to me tapped me on the shoulder. “Center?” she asked with a strong accent, glancing at the map that was lying on my lap. I nodded slightly confused and she quickly pointed to the door of the bus that just had stopped. I hadn’t had the vaguest clue where to get of the bus, but thanks to this lady I was saved from at least one lost-in-translation-in-new-city-moment. And my first impression of the Slovaks? Super nice and helpful!

I got of the bus and again, had no idea where to go. I just started following the few other people that got of at the same stop. It was a late Sunday morning and the city seemed very quiet; there were little “city center sounds” that could have led me into the right direction. But I just started walking and when I spotted a church tower and more and more little red tram carriages past by me I knew was heading in the right direction.

Then I turned around one corner and I stood in the middle of the old town of Bratislava — and I was in love right away. Narrow cobbled streets, cute cafés and colorful houses are just always right up my alley. Although it was almost noon, the city seemed like it was only just slowly waking up. Chairs were arranged, tables were swiped, and I saw a slightly increasing number of people happily getting lost in the little streets. And Bratislava also invited me to do what I like best: Stroll and just randomly stumble upon all the pretty things. I had done little research on Bratislava, because I wanted to be surprised. However, I also had a vague idea that I’d find all the important things eventually without trying too hard. Bratislava is a comparably small capital and it reminded me a lot of Ljubljana, the Slovenian capital that had absolutely charmed me a few years back. Both of these Eastern European capitals make it easy to get lost in the center and still make you see everything you want to see within a shot amount of time.

There were two things I really was looking forward to though: The coffee houses and the funny statues that Bratislava has become famous for in the last years. The photo I definitely wanted to have as a souvenir from Bratislava: A “From-where-I-stand”-photo with the famous Man at Work statue! Given this statue is like the Eiffel Tower of Bratislava, I had to wait in line for this shot, but I was glad I did! The second highlight of my day in Bratislava were the coffee houses. Although I was staying in Vienna (which is more than famous for its coffee culture!), going to an Austrian coffee house was rarely ever in my budget. In Bratislava though, I went to a gorgeous art deco coffee house right at Hlavné námestie, the most prominent square in town, and sipped a delicious coffee for 3,50 Euros — including a Slovak pastry filled with poppy seeds! In Vienna this would have cost me at least three times as much! After spending a few hours in the old town and several coffee shops (it was raining like crazy at one point, so I just had to hide out at another coffee shop right?), I had one more sight to see before heading back to Vienna: Bratislava Caste! It takes a couple of minutes to hike from the old center to the castle, which seemed to be located on the highest spot in town. I didn’t visit the castle itself, but that wasn’t what I had come for anyways: I wanted to explore the castle grounds and get an idea of Bratislava from above. And I wasn’t let down: The views were quite spectacular! It was only a brief stay in the Slovakian capital, but it definitely made me want to see more of the country. I know that you shouldn’t judge a book by its cover and you absolutely shouldn’t say you’ve got to know a country when you’ve really only spent a few hours in its capital, but I had a great first impression of Slovakia: The people were nice, the coffee was amazing, and old city center felt like an Eastern European fairy tale. Which photo impression from Bratislava do you like best?