The Art Historian’s Guide to Berlin in a Day 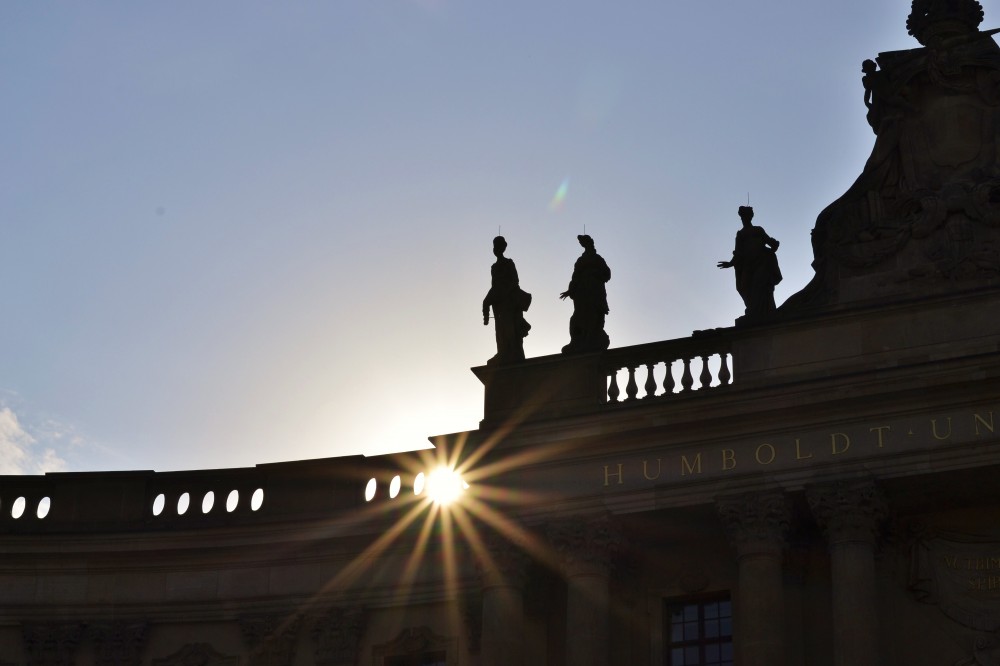 The Art Historian’s Guide to Berlin in a Day

Okay, I know the title of this article sounds insane. And believe me, it was quite the insane project. Berlin is huge — even more spread out than New York City! And it’s a common mistake for people visiting (or moving to) Berlin to think it’ll only take 20 minutes to get somewhere. The truth is, it usually takes rather 40 minutes. Or even more. This city is huge!

Remember how I tried to find hipster Berlin last summer and totally failed, because I underestimated how diverse and big Berlin is? Back then, I had given myself less than forty hours in Berlin and I barely even scratched the surface. Since that trip last summer though, I’ve been back to Berlin three times: In March to live the local life in Prenzlauer Berg and meet up with all my travel blogging friends at ITB trade fair, in August of a long summer weekend to eat fabulous food and drink rooftop beers with my boyfriend Steffen, and in September with my lovely blogger friend Jessica from the States — for a day trip.

Yes, you read that right: A day trip. To Berlin.

And yes, this third trip to Berlin this year was an insane attempt: Considering the five hours Jessica and I needed to go from my current home town Göttingen to Berlin and back via high speed train, we had less than eight hours in the German capital. Less than eight hours!

But I wanted to prove to myself that I learned more about Berlin since last summer and I wanted to show that is really possible to get a short, but intense glimpse of Berlin in a day. And here is the story of how we did it!

After getting up super early to catch the train at 7am, we arrived at Berlin main train station around 9.20 am in the morning. My plan was to spend most of the day in Berlin-Mitte, the city center with all the relevant historical sights, and end the day in Friedrichshain-Kreuzberg to get to know some other sides of the city.

I wanted to show Jessica all the iconic historical sights of Berlin, the World Heritage Site Museum Island, and the prettiest places in Mitte, but I also wanted to provide an experience of the cool, hip, and artsy Berlin. Full disclosure though: I’m not a Berlin local, so I might have done very little of what a local would recommend for a Berlin first timer. But I still think Jessica and I had a great day in Berlin and I loved finding new street art, coffee shops, and a few new convenient shortcuts. Because rolls and pastries from a German bakery are the only thing that make me get up this early voluntarily.

9.25 am: Arrival at Berlin Hauptbahnhof Alexanderplatz is definitely not the prettiest square of all times, but you can’t go to Berlin without seeing it: Ugly post-war architecture, the Fernsehturm and the Rotes Rathaus in the distance are just so very Berlin, that I figured this was the perfect spot to start our tour. From Alexanderplatz we walked to the Hackesche Höfe, which is a big complex of houses and courtyards. There were pretty benches underneath pretty trees, a movie theater, arsty shops, and lots of bikes. Picturesque, but not what we were looking for: I heard and um, seen on Instagram, that somewhere among all the pretty courtyards there was one alleyway full of graffiti and amazing murals and I was dying to see them for myself. And I was not let down: The alleyway leading to the café and bar Eschloraque (don’t even ask me how to pronounce this!) was pretty much the coolest place in Berlin-Mitte and I’m so, so glad Jessica and I made room on our itinerary for this. After graffiti and murals we needed coffee (remember we took the train at 7am?). The world (read: um, Instagram, again) agrees that The Barn is the best coffee shop in Mitte. Granted, I’ve had even better coffee other neighborhoods of Berlin, but I can still highly recommend the flat white at The Barn if you’re in Mitte. And I mean, they have Portuguese custard tarts to go with theirs coffees there! What’s not to love? I’ve seen this pretty park from the train so many times before, but coming from the coffee shop and the Hackesche Höfe, I realized (once more) how easy to walk around Mitte when you (sort of) have an idea where you’re going. The James-Simon-Park is actually just a tiny little park, but there are some cute cafés and it’s definitely the spot with the best views of the cathedral and Museum Island! Crossing the bridge over the Spree river from the park, one quickly gets to Museum Island, Berlin’s UNESCO World Heritage Site and an absolute must-see for lovers of neo-classical architecture! With so much art and history right there, Museum Island never ceases to amaze me! From Museum Island we walked along the Spree river towards the political center of the German nation: The Reichstags building and the chancellor’s residency are two buildings that telling the stories of the clashes of old and new — which are so characteristic for Berlin — exceptionally well. The Reichstag has experienced so many ups and downs that it is impossible to not be in awe of the architecture and the history this building has (not) survived.

In less than three minutes you can walk from the Reichtstagsgebäude to Berlin’s most iconic sight: The Brandenburger Tor. This place is always full people, random artists (dressed up as Soviet soldiers), sometimes even celebrities (Jessica and I spotted two super famous German comedians when we were there!). My tip for somewhat tourist-free photos of Berlin’s most iconic sight: Most people are afraid to get too close to the entrance of the American embassy, but it’s totally fine to take a few photos from that side of the square. Unter den Linden is the street leading to the Brandenburg Gate and it’s basically Berlin’s Champs-Elysées: A grand boulevard with the fanciest hotels, expensive cafés, and all the embassies — the place to see and be seen. What better time for a little break in the sun to rest our feet (granted, at Dunkin Donuts, because we couldn’t afford coffee in the Adlon aka Germany’s most famous hotel right across the street).

Four times a day, there is a free Berlin walking tour by Sandeman’s New Europe Tours staring right in front of Brandenburg Gate. Having been on the tour last summer, I knew what we were going to see and learn about. I could be sure that we would see all the other important spots in Berlin-Mitte, so I passed on the baton to our walking tour guide. The most crucial sight: The Memorial of the Murdered Jews in Europe — I’ve been here so many times, but this memorial gives me the shivers every single time. As I’ve taken and written about the walking tour before, I’ll just quickly mention the highlights on this tour, because I don’t want to be redundant. (If you want to learn more about it, see my post on the walk around Berlin’s famous sights from last summer). One square needs an extra mention though: The Gendarmenmarkt — because this is one of the very few places where Berlin is actually beautiful. It sounds a bit cruel, but if you ever get annoyed with all the concrete and constructions sites in Berlin, come to Gendarmenmarkt to remind yourself what Berlin could have looked like.

Just like many other places in Mitte, Bebelplatz is again a place with a dark history — in this case, the burning of more than 20,000 books by the Nazis — but I love coming here, because the majestic building of the Humbolt University, the university where pretty much every famous German scientist (including Albert Einstein!) studied. After our walking tour, we were craving food: And what better place to get some proper Berlin Turkish food than Kreuzberg? This neighborhood is multi-cultural, chaotic, and the hippest place to be. We hopped off of the U-Bahn at Kotbusser Tor (apparently the infamous square “where you can get every drug in the world”), where we ate kebabs and drank ayran, a salty Turkish yogurt-like drink, and just watched the hustle and bustle of Kreuzberg. You could spend all day watching people here and I promise you, you’d never get bored. Berlin is a lot of things, but besides all the cultural and historic sights, Mitte is not really representative of what makes people fall in love with Berlin. So even if it was only for an hour, I knew Jessica had to see a little glimpse of Kreuzberg to get the idea of what Berlin is like beyond Mitte.

A few stops on the U-Bahn again, and we were at Warschauer Straße, yet another infamous stop right in-between Kreuzberg and Friedrichshain. Last summer, I spent two weekend nights exploring this area and I assure you, it’s insanity: So many interesting people, so many clubs, so many drugs. Of course, it’s not the same on a Tuesday afternoon, but the lamp posts being basically swallowed by posters and flyers, the dirty streets, and the graffiti still give a good idea what it is like at night. From Waschauer Straße subway stop it’s only a short walk to the Oberbaumbrücke, Berlin’s prettiest bridge. The red-brick bridge itself is gorgeous, but the view from there is even better — and being right next to Berghain,  Berlin’s most famous club, the bridge has somewhat of an infamous reputation as well.

The Oberbaumbrücke is also located right where the East Side Gallery (the world’s largest outdoor gallery!) starts and this part of the Berlin Wall was the last item on our things-you-can-totally-not-miss-during-your-first-time-in-Berlin-itienrary. Decorated with murals by famous artists from all around the world, some of the art work here has become just as recognizable and iconic as the Brandenburg Gate. And no matter how many times I come back here, I always discover something new about it (though honestly, most of the time it’s graffiti penises on people’s noses). Coming from the Oberbaumbrücke, the East Side Gallery leads to the Ostbahnhof and from there it’s only a short ride back to main train station, where our day in Berlin began. We stocked up on a variety of Berlin beer brews as souvenirs and watched the sky turn pink, before we boarded the train back to Göttingen. What a day! (Obviously, we slept like babies on the train back.) What do you think: Did we do everything we could in Berlin in a few hours?
Would you have done something differently?

Also, have you ever tried to visit a capital in a day?

Thanks to Jessica for the photos of the two of us — and for teaching me her exceptional selfie-taking skills!