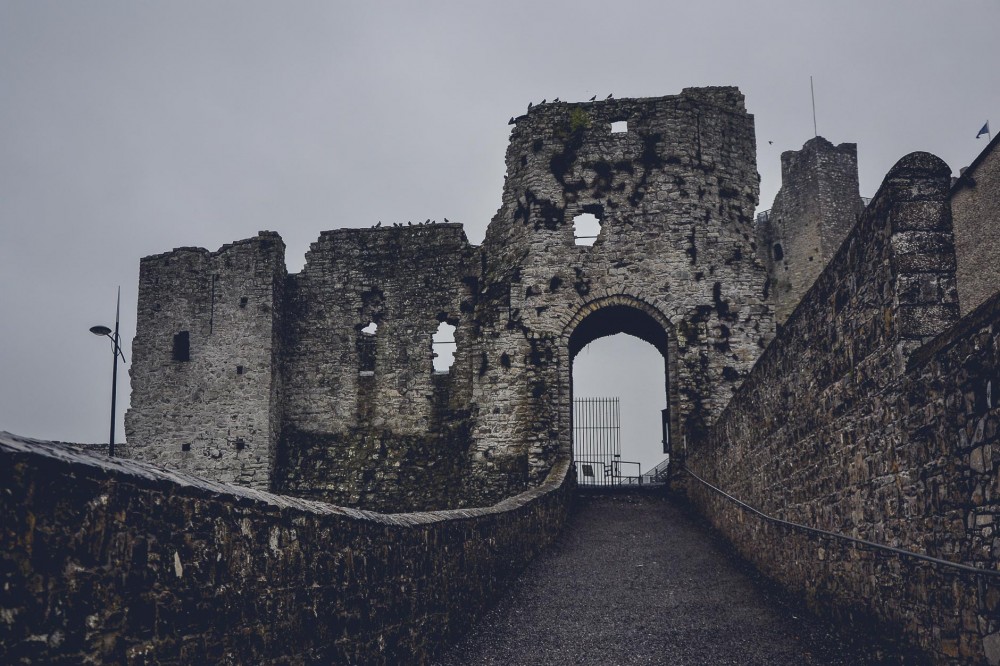 Even before I opened my eyes, I knew it was going to be a gloomy day. The morning light falling through the old, porous curtains was barely recognizable.

It was October in Ireland and it had been sunny the days before, but it seemed like the clouds were taking over after all. As I walked through Dublin on this grey morning, carefully trying not to step in any puddles, I could not shake off the feeling that it was a sign that the sun did not show that day. I had slept little the days before and when I boarded the bus, I quickly dozed off into an uneasy sleep. The guide told stories about the origins of the Irish languages, but being only half-awake all I heard was foreign sounds of an ancient language.

The bus left the city of Dublin behind and the further we drove, the more the colors seemed to fade away — only the greens of Ireland’s endless meadows was not yet swallowed by the grayness surrounding us.

It did not take long until we passed by a remote cemetery and pulled up a driveway leading up to a green hilly area. The Hill of Tara. I knew little about about this place, but I knew there were going to be tombs: Ancient tombs telling the stories of ancient kings and ancients cults. No one really knows the true background of the Hill of Tara — but it had been a place of royal residency of the High Kings, but maybe also of war and religion for centuries. A passage tomb dating back to 2,700 BC got my imagination running, until some something glittering in the distance caught my eye. “A Wishing Tree”, said the guide carefully. He tried to sound casual, but in his tone I recognized that these trees were less harmless than he implied.

I had never considered myself to be superstitious, but I was kept me from walking towards the mysterious tree: Something inside me was convinced that one should not take fairies easily. The Hill of Tara had left me with a tense feeling. But the windy hill with its ancient tombs was not even the scariest thing I encountered this day.

As we drove further into Boyne Valley, it started to rain. The raindrops smudged the windows of the bus and created blurry frames for the countless ruins of churches we passed by. And then, all of a sudden, it appeared before us: Trim Castle, the mighty medieval fortress. The dark, massive walls were the only thing that built a contrast against the gray skies. The gloominess was uninviting, but the fascination overweigh: I dared to walk towards the entrance gate. Just as I passed through the gate however, the storm that had been hovering above the Valley all day started showing its tremendous powers. The fog that came with the pouring rain swallowed the contours of the buildings and turned everything into dark shadows. Was it really just my sleep-deprived imagination that made the ruins look like grotesque faces? I took the slippery stairs to one of the vaults to find shelter from the boisterous rain, but I instantly regretted my choice: The stone arch felt heavy above me and it seemed like there had been no daylight for centuries. The sound of the rain was only to be heard in the distance and the darkness was all-embracing. I quickly decided that I preferred the pouring rain over the darkness of the vaults. Leaving the dire 12th century fortress behind, Boyne Valley had an even uncannier site to offer: Monasterboice.

Celtic crosses and old cemeteries were something I had expected from Ireland, but Monasterboice was more then that. It was darker than I had anticipated. I felt like I was drowning in a sea of crosses and tombstones, but this was not what I found most disturbing about the cemetery and monastery ruins dating back to the 6th century.

The ruins told the story of catastrophe and destruction as the monastery had been destroyed almost a thousand years ago. And although the tower walls of the former church stood abandoned ever since the great fire in 1097, it seemed like it kept being the home of some living creatures after all: Crows. So many crows. The crows circled above the ruins, making me feel like an invader or potential prey. Their croaking was so permeating that I could barely hear any other sounds.

“Sometimes there are so many crows here that the sky turns black during the day”, the guide said with a stern voice. I did not I even want to know what that would have been like. At this point the fog had become even thicker and I had lost my feeling for shapes and distances. Despite the ruins and the graves there was no sign of civilization. I tried to concentrate, but the blurry shapes I could make out behind the cemetery walls appeared to become more monstrous with every glance. I was relieved when we left this desterted place behind us. On the way back into civilization, we hid from the rain in the cathedral of Drogheda for a little while, but the gloominess that had accompanied me on this day in Boyne Valley was not letting go of me for days. Have you ever visited this gloomy side of Ireland?

Note: I took this day tour with Extreme Ireland, who kindly hosted me on the Celtic Boyne Valley Tour. All opinions and Edgar-Allan-Poe-esque interpretations are entirely my own though.