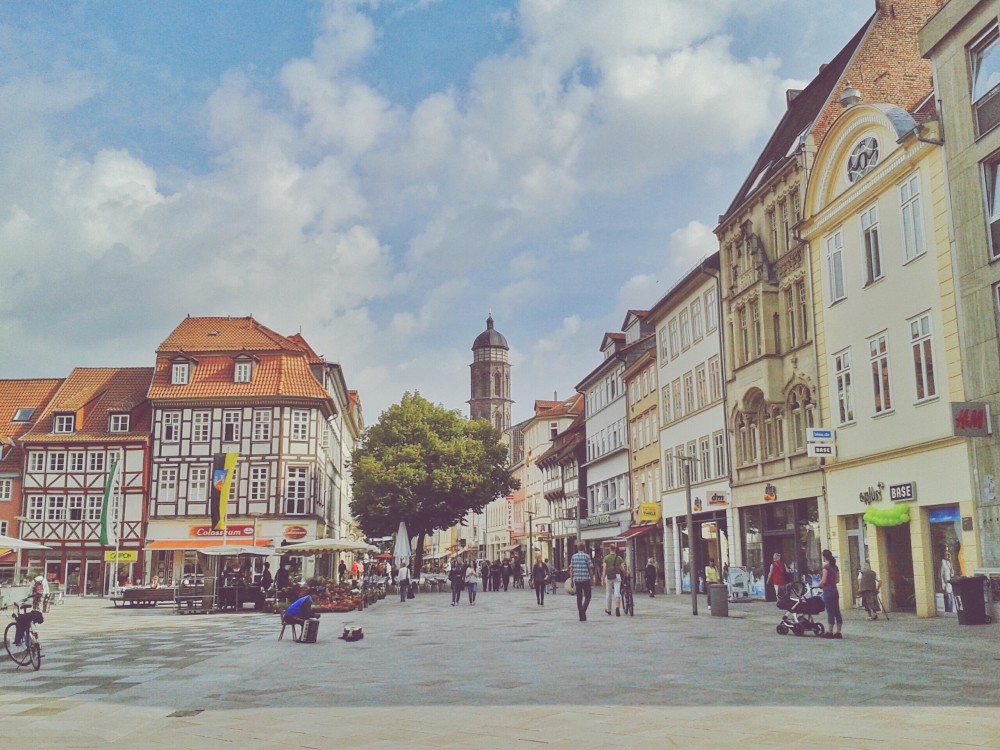 Ever since I started working as a medievalist last fall, I’ve been struggling with finding balance in between being the busy art historian and the blogging part-time traveler. I admire bloggers who manage to be successful in their day-jobs and still stick to a regular writing schedule. But the thing is, my job is a job that is never really done — I could always read more, study more, think more, question more. And in the past weeks I learned that if things get tough at work, I can’t just hop around the internets, edit photos and write. However, besides working in PJs in the middle of the night and getting up before sunrise to work more, I at least had the time to snap a few photos with my phone. I know I’ve been a crappy blogger in July, but I hope I can make up for it by sharing a few photographic snippets of my everyday-life in July and the stories behind them.

I’ve written a two birthday-related posts already, but my actual birthday wasn’t really mentionable: I went grocery shopping, cleaned the apartment, and went to work where I never even mentioned that it was my birthday and so most of my coworkers had no idea. Rather low-key, but at least I squeezed in an extended waffle lunch break in the sun and had a little Turkish-food-heavy dinner party at night. Maybe it was a sad birthday, maybe it was just was grown-up birthdays are like — but for me, it was just right for this place and time. All of Germany was so excited for the World Cup to finally to begin, but it still took quite the while until the real excitement kicked in — but the closer the German national teams got to the finals, the more excitement could be sensed everywhere. I’m always amazed how Germany changes when there’s a Soccer World Cup going on: Not only does every single TV commercial and print ad suddenly have some kind of soccer relation or a player’s face it in, but it’s also the only time you’ll see flags in Germany. Germans don’t care about their flag, nor would they dare to present it randomly. But during World Cup season, pretty much all windows, cars, shops and university cafeterias are decorated in black, red, and gold. My favorite flag however was displayed at my local supermarket, shortly before the match against Brazil: Sigh. Summer in Germany is always a rollercoaster ride: It might get slightly hot (usually on Tuesdays when you have to work until 7 pm), but it’ll be freezing and raining again within a few days (usually on Saturdays). I’ve barely worn sandals this July, and every time I forgot taking a just-case-umbrella with me, I got soaked. All I can say: If you travel to Germany in the summer: Come prepared, expect everything possible, wear layers. It’s just a constant up and down. I don’t think that the blog is (or should be) a place where I talk about work a lot, but my career as a medievalist and art historian is taking over the biggest part of my life. This July there was a lot going on, but by far the most challenging thing was giving a talk at a conference in front of several super famous medievalists. I was the youngest and most inexperienced attendee at the conference and I spoke about a topic that I had been working on for six months, but my audience was experts, professors, and serial book publishers in that very academic field. It had been a long time since I was this nervous. And this terrifying talk also was one of the main reasons I spent most of July researching digitalized 15th century manuscripts and hunting down forgotten books in libraries. I hate decisions and making up my mind. I prefer waiting and seeing if things sort them themselves out. Also, I’m massively afraid of long-term commitment and putting my signature on documents. I was 25 when I signed up for my very first credit card and I still don’t even have an Amazon account. And although I’ve moved around quite a bit, I never signed an actual lease. Instead, I’ve become an expert when it comes to oral subletting arrangements. But I couldn’t keep postponing real grown-up life forever: My roommate is moving to England in three weeks (can’t wait to visit her!) and I had the once in a lifetime chance to take over our apartment as the main tenant — and after months of frustrating apartment hunting in Göttingen last fall, I just couldn’t let this opportunity slip. And suddenly this means bills, insurances, and so many official letters. With this decision, I’m not only investing a bigger part of my travel fund money into deposit, rent and furniture (which I have never even owned before!), but I’m also giving up a lot of my freedom. I’m tying myself to an apartment, a city, and life — and I’m really not sure if I feel ready for this just yet. Despite being busy, sleep-deprived, and emotionally slightly unstable, July did have few highlights: Crashing a high school prom (oops), watching an open air movie at the public pool, and attending a wedding in (very rural!) Northern Lowery Saxony. I know it’s not the most glamorous life I’m living, but I’m trying to figure things out: Every month I’m trying to start fresh, trying to find that equilibrium between all the things I dream of and that I want for myself. There are just some times in life that you have to make up your mind about your priorities — but it doesn’t mean that you can’t change those priorities the next month. Here’s to August! PS: You can find me on Instagram as @JulikaSarah.