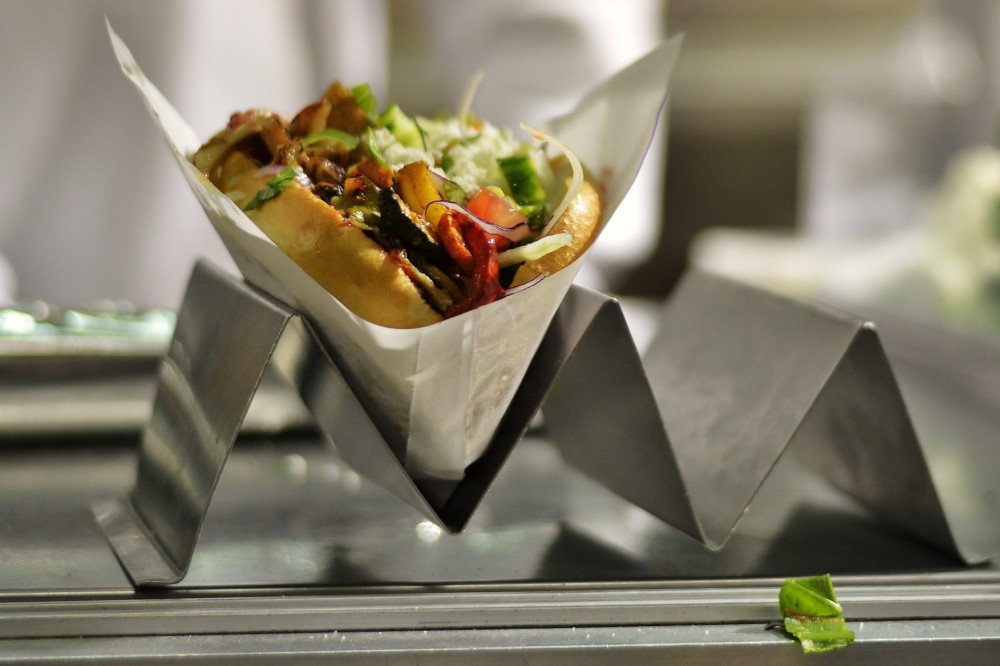 Berlin is not a foodie capital per se. Obviously, international tourists do come for the legendary currywurst, national visitors tend come for the best döner kebabs in the country, but other than that — what is special about food in Berlin? Other than that the city is so multicultural that there won’t be any international cuisine you couldn’t find? But, there’s got be more than sausage cut in slices with ketchup and curry powder on top, right?

I’m not sure if Berlin really has its own cuisine. But there are some foodie hypes that spread beyond the borders of the German capital — thanks to movies, TV reports, Instagram, and mouth to mouth propaganda. During my last two visits I thus tried to sample some of the food hypes to see if they can hold up to their promises. Verdict? Read on.

When a friend of mine raved about finding a shop selling sushi-like snacks somewhere in the Berlin underground, I was a little disgusted at first. I’m a huge germophobic and buying food next to platforms — let alone eating somewhere with most likely a distant smell of pee in air — didn’t sound intriguing to me at all. And what was sushi-like supposed to mean anyways? A few weeks later though, I accidently watched a TV report about this very sushi thingie place and learned what this Berlin food myth is all about: Onigiri — a Japanese snack with rice and nori leaves looking a lot like sushi, but in a bigger triangle shape. Plus: The fillings are not only raw fish, but also sweeter flavors like pumpkin or mango. Learning all this, I knew I had to stop by this subway shop and try the snack, which Japanese apparently consume even more of than sushi. It turned out that buying something next to a subway platform wasn’t all that scary: All the ingredients are produced organically and at 5 pm they were already almost sold out — a good sign! I tried the last savory onigiri with salmon and was pleasantly surprised. If you truly love sushi and anything that tastes similar, eating while watching an underground train rushes past you is not at all weird. I only wish that train stations always came with little onigiri snack shops!

Info: Head to “Schönleinstraße” on the U8 and you’ll end up right in front of the Rice Up booth.

2. The Kebab Place with the Longest Queue

Rumor has it, that döner kebab was invented in Berlin by Turkish immigrants. And I’m convinced that it can be considered a fact that kebab is probably every German’s favorite food, because even the tiniest German village in the middle of nowhere usually has its own little kebab shop. But if you should try a kebab only once in your life, make sure it is in Berlin. Not only are they super cheap here, but intensely flavorful! One of Berlin’s kebab shop stands out however: Mustafa’s Gemüse Kebap. Mustafa’s is just a little food truck in front of a subway entrance — with no chairs or any other amenities. And yet, this little place is famous: For having the best kebab in town and the longest queue. And I could not wait to finally try it! They have only four dishes to choose from: A veggie and a chicken kebab, either inside a pita bread or a dürüm flat bread. And yes, I can now officially declare that I’ve had the best kebab of my life in Berlin. (Full disclosure: I don’t eat meat so I can’t say anything about the taste of the chicken kebab, but I had three non-vegetarians join me for dinner at Mustafa’s, and they loved it!) At Mustafa’s they don’t just put raw salad veggies and an uninspired yoghurt sauce into your bread, but everything from grilled bell peppers to potato wedges, topped with a red spicy dip, a delicious garlic sauce, and a splash of fresh lemon. Spices, herbs, toasted pita bread, juicy feta cheese, and the grilled veggies definitely create the most flavorful meal you could possibly have for less than four Euros! And totally worth queuing for half an hour! Seriously, best kebab ever!

Info: Take the U6 to “Mehringdamm”, Mustafa’s Gemüse Kebap is right in front of the exit.

3. The Burger from the Public Toilet

Burgermeister is outdoor restaurant in Kreuzberg that is equally loved by locals and frequented by tourists. It’s been featured in movies and probably hundreds of vacation photo albums on Facebook. It’s definitely one of the most hyped foodie locations in Berlin. Why it became so famous in the first place? Because this burger place is a public toilet! Yes, you heard that right. Burgers made inside a public toilet are supposed to be the best burgers in all of Berlin. Granted, it’s a very pretty, old public toilet — but still. Just like at Mustafa’s you will spend some time waiting in line and the menu is really small: They have a usual burger, a tofu-burger and (chili) cheese fries. However, you can add several extra toppings like onion rings onto your burger and choose a sauce you like. I went with a tofu burger with a mango chutney sauce — and I must confess: Best tofu burger I ever had! I know it must be super annoying to read my plain positive food reviews, but I can’t help it: It was the fluffiest, tastiest tofu patty I ever had. And the cheese fries? I can’t even. Absolutely worth the hype. (My meat-eating friend agreed as well!) And how hipster is it to eat in front of an old-fashioned public toilet? Info: Either walk from “Warschauer Straße” (and take a little detour to see the Easy Side Gallery!) or take the U1 to “Schlesisches Tor”. Burgermeister is right underneath the underground bridge.

Yes, so, I really tried to myth-bust three famous urban foodie myths in Berlin — with the shocking result that there is nothing to myth-bust! All three meals lived up to the hype and I can highly recommend them all — especially as they all cost less than five Euros and are definitely must-have experiences in Berlin that fit into every budget! I can’t wait to go back to Berlin to find more quirky foodie locations!

Have you heard of any these Berlin food hypes? Would you try them?
Do you have any tips what I should try in Berlin next time?