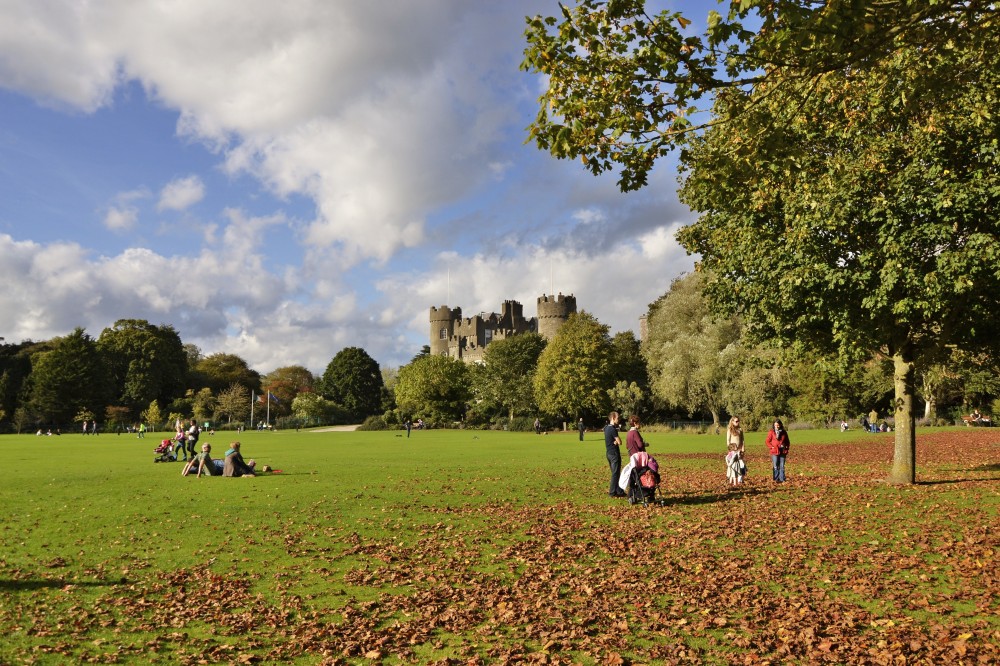 I’m not a person who is easily impressed when it comes to castles. I mean, I love castles. How could I not? But my home country has approximately 25,000 of them, so it takes something special to catch my eye. But then Ireland happened. Ireland’s castles are defensive, eerie, and mysterious. They don’t look like something straight out of a fairy tale. They seem darker, because they have fewer windows and there a often ruinous remains of churches and cemeteries nearby. Malahide Castle about 30 minutes north of Dublin is no exception: It’s everything you’d want an Irish castle to look like. Malahide Castle dates back to the 12th century. It was the residence of the Talbot family for almost 800 years — until 1976 when it was sold to the Irish state by the last heiress of the Talbot family. The castle history and architecture is thus closely intertwined with the ups and downs of the Talbot family history. Although I really like the thought of one family residing in a mysterious castle for centuries (so Poe!), what impressed me the most were the parks and gardens around the castle. Some trees there were more than 400 years old! And in case you wondered: It’s a medieval castle in Ireland. OF COURSE it is haunted! The castle tour guide mentioned that it would take at least a day to recount the story of every ghost that’s said to live in these ancient halls, but the most famous one is the ghost living in the Gothic dining room — a young man who hung himself from the musicians balcony, because of a very unhappy love story. Today, he lurks unnoticed in the corner of the dining room, watching all the young tourists girls walk past him, looking for a new love… The weather tricked me a little however: As much as I wanted to perceive Malahide Castle as a haunted, mysterious castle from the dark Middle Ages, the weather was just too nice to make that possible. Instead of a day with gloomy clouds and drizzle, I visited Malahide Castle on a perfect October day with blue skies and fluffy clouds. The huge park surrounding the castle was not spooky and empty, but filled with laughing kids throwing fallen leaves. I even spotted a wedding party during a romantic photo session. The happiness of the people around me and the fall beauty of the Malahide park fascinated me even more than castle from the inside. Nonetheless, its setting amidst ancient trees and endless green meadows created the utmost perfect dreamy image of Ireland: Green grounds, mighty clouds, and a castle in the distance — does it get more Irish than this? Additional Info: I visited Malahide Castle with the North Coast Tour offered by Dublin Bus. As the tour only takes 3.5 hours, it can easily be combined with a sightseeing day in the city of Dublin. The castle itself can be visited for free, but with a 20 minute guided tour only.