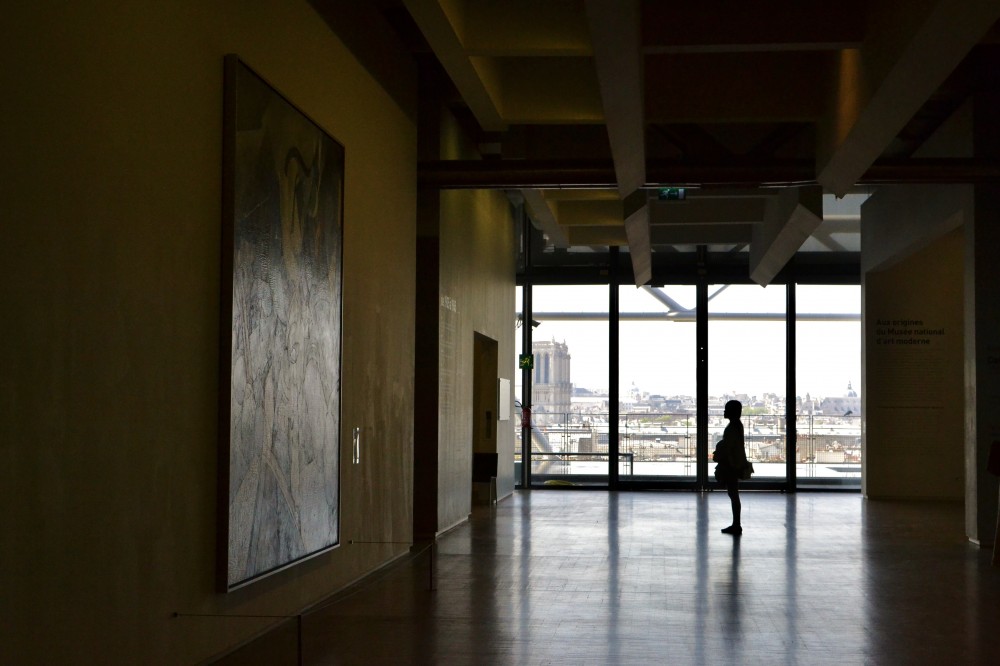 It was during my last years in high school during my art class when I realized that I’m biased when it comes to architecture. I quickly fell in love with medieval cathedrals and I admired ancient Greek and Roman architecture. I learned to read Renaissance footprints and I was charmed by ornament-rich 19th century historicism. But at in the beginning of the 20th century architecture somehow lost me… When I saw a photo of Paris’ huge museum for modern art for the first time, my reaction simply was “ugh, that’s ugly”. And it’s true, the Centre Pompidou cannot be considered to be beautiful in any sense. This building does its stylistic definition “brutalism” justice, because it truly is kind of brutal to look at — especially if you expect a museum to be in a more classically pretty building. Hence, neither the Centre Pompidou nor its modern exhibitions were on my previous Paris itineraries. I saw no point to prioritizing this museum. Until three weeks ago. I decided that on this visit to Paris I finally had to visit the Centre Pompidou for two reasons: First, I just wanted to finally see this famous museum which had been haunting my French books for so long. Plus — admitted, that was my major reason to go — the views from the museum were supposed to be amazing. I kept my expectations low since I’m usually not the biggest fan of modern art. The art at Centre Pompidou begins with Henri Matisse and goes on until the 21st century. From Ives Klein to Pablo Picasso, all the famous names in modern art are present there. Obviously, modern and temporary art is sometimes slightly confusing — if not disturbing. But although I certainly didn’t understand everything, I realized what I really like about seeing modern art: Photographing it! A further developed fluffy version of a Mondrian Finding catastrophe (oh and a reflection of me!)

But still, what I was looking forward to the most were the views from the top of the building — and I was not disappointed! Since the museum is located in the Marais, it is surrounded by every recognizable building defining the Paris skyline: The iconic Parisian rooftops with their many little chimneys as well as Notre-Dame and Sacré-Cœur and the Eiffel Tower in the distance. A sea of Parisian rooftops and a certain famous tower A glimpse of Montmartre and Sacré-Cœur in the distance From the many places to see Paris from above the Centre Pompidou has quickly become my new favorite — what could be better than seeing this amazing city from above surrounded by art?!

Is the Centre Pompidou one of the highlights you wouldn’t want to miss in Paris?

Practical information: The Centre Pompidou is open every day from 11 to 21 pm and costs 13 Euros admission. However, if you are a European resident under 26, you can get in for free.