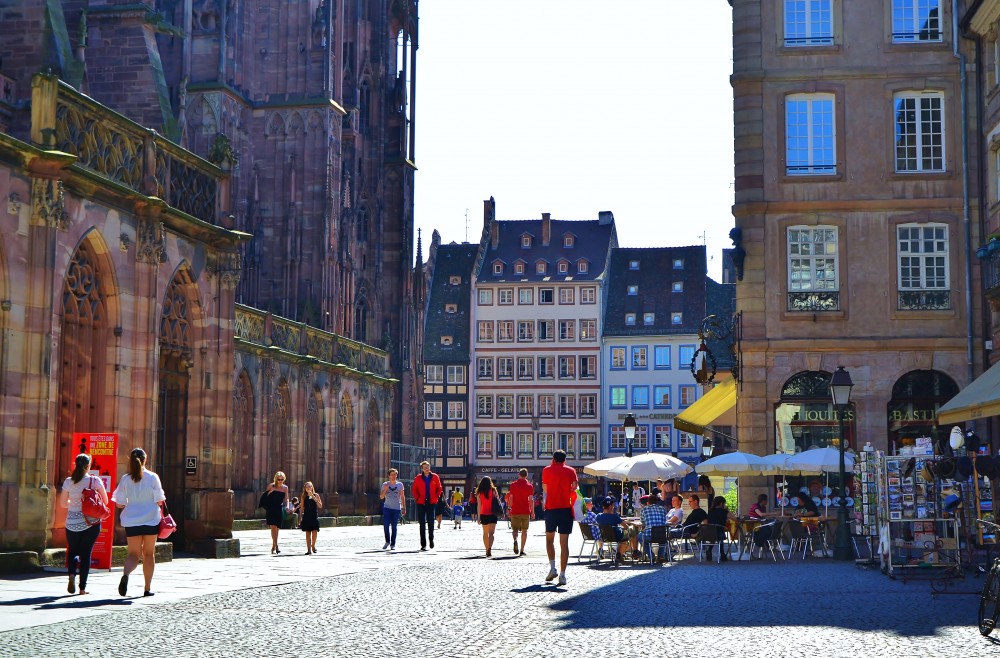 Yet another alliteration, but this time it really makes sense — the biggest city in the French Alsace region is truly nothing but stunning: The medieval center of Strasbourg is circled by canals and the majestic cathedral towers over the half-timbered houses with their colorful shutters. Little deserves the term picturesque more than Strasbourg. One of the many cafés next to the cathedral “Unicorn” beer — What other beer could you drink in a fairy tale city? Strasbourg may be close to Germany, but it still feels SO French!

The cathedral is surrounded by souvenir shops and restaurants as this area is the center of all touristic attention. Although Ashley and I visited Strasbourg on a week day, the city was alive and buzzing. From our impression the tourists visiting Strasbourg however, were mostly not international ones — we heard all lot of French and German of people who were apparently on a city break in the area. The cafés and restaurants were filled with people enjoying delicious Alsatian delicacies like the traditional tarte flambée and regional wines. A Thursday night in Strasbourg… Besides the breathtaking Gothic cathedral — which is without doubt the most memorable landmark of the city — one of Strasbourg’s highlights is the little neighborhood Petite France. This old quarter consists of many canals, bridges and the most iconic half-timbered houses. As soon as you enter Petite France it feels like you entered a different time — if it weren’t for people in jeans buying postcards all around, you could actually believe that you just time-traveled to the Middle Ages. Ashley and I spent hours strolling through the little streets and taking a crazy amount of photos, because the late afternoon spring light and the reflections of half-timbered houses on shimmering water made for the most gorgeous motifs. It was a perfect spring day: Students were reading on river shores, kids were running around in the parks, and — of course — men were playing Boule. A close-to-perfect reflection of the cathedral’s tower

Unfortunately, the weather didn’t stay as perfect as it was on our very first day in Strasbourg. Nonetheless, I don’t mind a little drizzle (read: pouring rain) when I can flee into a gorgeous cathedral. Or into a cute café with the richest hot chocolate ever. And even during a classic central European April downpour the city remained being downright beautiful.