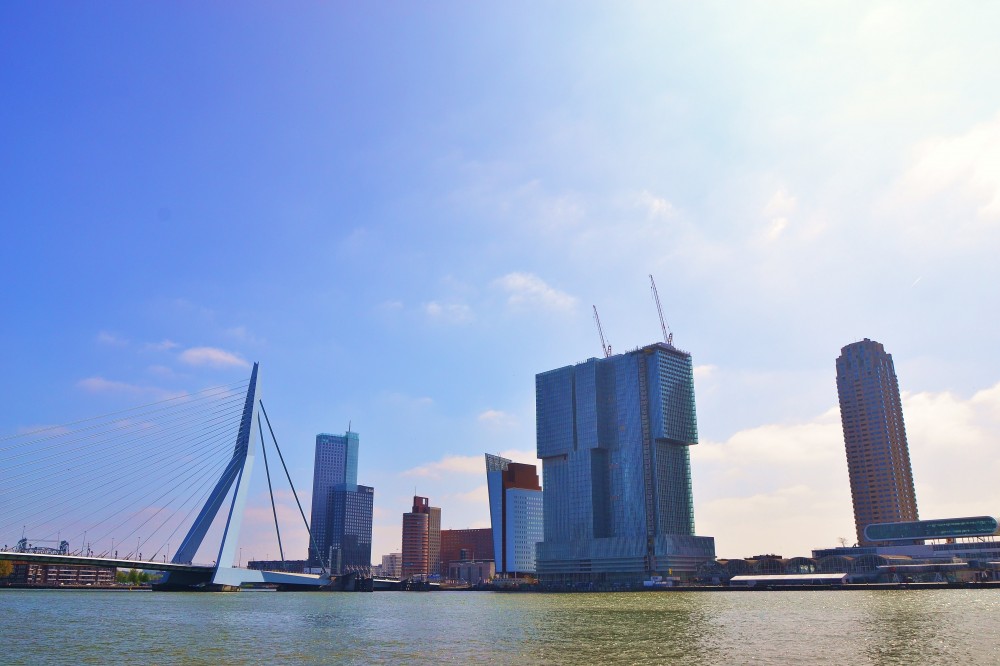 Rotterdam is a city with a reputation. And that’s not the very best one. I’ve heard people calling it the ugliest city in the Netherlands.

I knew before I arrived that I wouldn’t find anything I usually love about European towns in Rotterdam: No narrow cobblestone streets, no old-fashioned cafés, no breathtaking Gothic churches. All the words and phrases I normally use to serenade the picturesque cities of Europe can’t be used when describing Rotterdam. Let’s face it — Rotterdam is not the typical European city, because it doesn’t have a medieval city center with ancient little shops and tiny streets.

Rotterdam is not even a typical Dutch city, because it doesn’t really have beautiful canals with romantic reflections of brick houses. Rotterdam is different. However, it’s certainly NOT ugly! I don’t know if it’s because I lived in one of Germany’s ugliest cities, but my standards for describing a city as ugly are pretty low. I’ve seen “ugly” before — and urban ugliness are run-down casinos on every corner and gray concrete hiding any kind of natural environment.

Rotterdam however has nice shops and pretty streets. It has boats and water taxis. And long alleys with big trees. And the sound of seagulls. Rotterdam probably just seems ugly when you look for supposed authentic “Dutchness”. If you want find that here, you’ll search in vain. But if you’re open to a new architectural interpretation of what a Dutch harbor city might look like, visiting Rotterdam can be an amazing experience! Rotterdam is modern. Its architecture is futuristic: Steel, glass, and geometrical forms. Since the city was almost entirely bombed during World War II, there are rarely any buildings older than fifty years.

But Rotterdam has the biggest harbor in Europe and the city’s history is defined by the closeness to water. And for me, water and a huge harbor with ships that can take you anywhere in the world have its own kind of beauty. And oh, I just love the sound of seagulls! Granted, Rotterdam gave me a hard time liking it, because the weather was just horrible. Of the five days I stayed in Rotterdam there was only one on which I dared to take photos without creating depressing, rainy gray in gray images and getting the camera soaked.

So, the photos I chose for this first capture of my Rotterdam trip are not really representative of my time there. But I wanted to show it in the best light to get rid of the prejudices: Rotterdam is not ugly. It’s just not what you would expect of a Dutch city.

Have you been to Rotterdam?
Would you like to visit even if it’s not the typical Dutch city? I visited Rotterdam to attend the Travel Bloggers Unite Conference (TBU). Although I had a great time, learned a lot, and met amazing people, I still haven’t made up my mind whether I should write in depth about what it feels like to attend a conference on the business aspects of travel blogging when you don’t really feel like a grown-up businessy person yet. Somehow, I think I should rather stick to writing about the places I visit instead of writing about the business of writing a blog. What do you think?