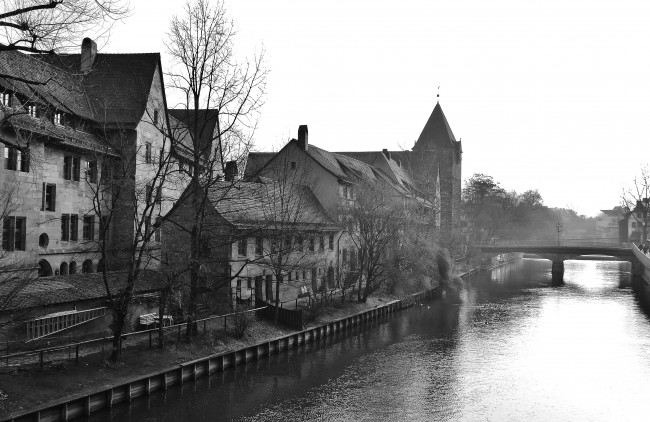 Nuremberg is one of those cities which are love at first sight. As soon as you pass through the main entrance door of the train station, your eyes fall upon the late medieval town fortification and into the cobblestone streets lined with half-timbered houses leading into the old city center… Yes, Nuremberg, you had me at hello. But to really understand this city, there is a lot to know — from a gloomy history to quirky regional and dialect pride to famous little sausages. First, a little note on regional mentality: Although Nuremberg is geographically located in the German state of Bavaria, the Bavarian region within which Nuremberg lies is called Franconia. If you know a little bit about Germany you probably heard that Bavarians don’t really like to be considered a part of Germany. Bavarians are proud of their own cuisine, their beer, their dialect and their history full of fairy-tale-castle-building-kings. And some Bavarians even think Bavaria should become an own country. (Basically, Bavaria is the Texas of Germany).

Now, what Bavaria is to Germany, Franconia is to Bavaria. The Franconians don’t like to be considered Bavarian. They are proud of their own cuisine, their own beer, their dialect… Well, you get the pattern. (If any Franconians happen to read this — please don’t be mad that I compared you to Bavaria and that I called Nuremberg a Bavarian city in my previous post.) If you want the people of Nuremberg to be your friends, appreciate their “Franconianess”. But back to entering from the main train station, where you are charmed by Nuremberg right away. Sadly, what you see at your first glance when arriving in Nuremberg mostly isn’t real. The castle, the many Gothic churches, the medieval houses, the fortifications — are all reconstructions of what Nuremberg used to look like before it was razed to the ground 68 years ago. Because Nuremberg was one of Hitler’s favorite cities.

The very beginnings of Hitler’s party and his early political moves, the propaganda videos of a role model German city, the race laws causing the deaths of millions of people — all this is closely intertwined with the city of Nuremberg. The city’s history is dark, scary, and difficult. Even when you’re there to mainly explore the medieval history of Nuremberg, you can’t suppress the feeling that some things were going horribly wrong in Germany for centuries. You will find yourself marveling at the beautiful Gothic facade of the Church of Our Lady, the Frauenkirche, until you learn there once was a synagogue on the exact same spot. In the 14th century the people of Nuremberg destroyed the synagogue, killed Jews living in this former Jewish neighborhood — and then decided to build their Christian church on top of the ruins of Jewish memories.

You can’t enjoy this late medieval church anymore once you know what price was paid to build it. And this is only one of the early examples. With Nuremberg becoming such a popular city during the Nazi regime it only got worse… Experiencing Nuremberg is experiencing a stunning medieval beauty with an aftertaste. Nonetheless — today’s Nuremberg is a city absolutely worth visiting: Great architecture, wonderful art historical treasures, amazing beer. And besides its difficult history, it’s famous for three fabulous things: Nürnberger Würstchen, a little sausage with a one of a kind taste. Nürnberger Lebkuchen, Germany’s best and most famous kind of gingerbread. And the legendary Christkindlmarket, one of the most beautiful German Christmas markets. As long as you keep in mind that Nuremberg’s past is complicated and frightening, but so important to be remembered, you will be able to carefully enjoy the amenities of this Franconian historical treasure chest. Have you been to Nuremberg or Franconia? How do you deal with the difficult beauty of historical places like Nuremberg?