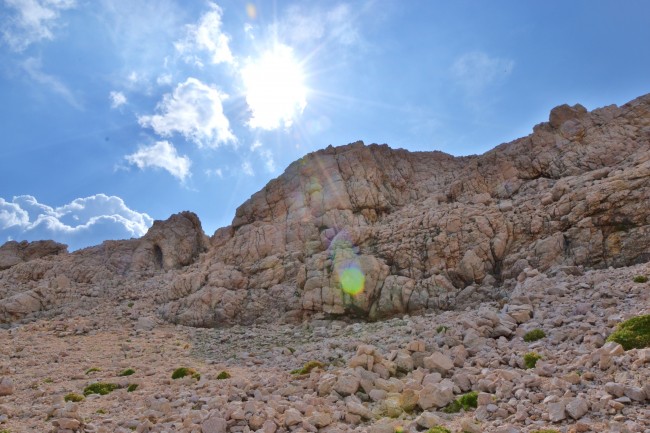 Moonwalking?! Wait, what? Yes, moonwalking in Croatia. But it has nothing to do with Michael Jackson. Or the actual moon for that matter.

The landscape on the island of Krk seems to be from outer space so someone smart came up with the idea to nickname the hiking trails of Krk “moonwalks”. At least this was what my guidebook said. Honestly, I had my doubts. I had seen photos of Croatian islands — beautiful pebble beaches surrounded by green pine forests and Mediterranean cities. All these typical Croatia photos depicted an insanely colorful country: Bright red old tiles on every roof, roses in every color of the rainbow, and the endless shimmering shades blue of the Adriatic Sea. Who would dare to compare this multicolored landscape to a monochrome lunar one? As it turned out, my perception of Croatia was wrong. At least when it came to one of the largest islands in the Adriatic Sea: Krk is not as green and vivid like the famous and perfectly beautiful island of Rab for example. The city of Baška itself, where my family and I stayed, looks somewhat like the Croatia I imagined, because it lies in a weatherproof bay. But it is framed by mountains — waste, stony, and overwhelmingly unlike everything I expected… My family and I have always been fans of hiking and when we booked our Croatia vacation for October we were pretty unsure if the weather was going to be good enough to spend time at the beach. So hiking was our plan B. And we were actually looking forward to hiking those apparent “moonwalks”.

The island of Krk has a great hiking infrastructure. With a free map of hiking paths we picked up at the tourist office, we could plan our routes easily. The hiking trails are divided into different levels of difficulty by colors, of which red signifies the most difficult ones. And bravely considering us as advanced hikers (ahem), we went for the red tracks — and had to learn that when Croatians say “difficult trail”, they actually mean it. Those red hiking paths were TOUGH. (So tough, I couldn’t even take pictures of the super tough parts, because I was focusing on not breaking my legs.) Not even the toughest part yet… (and yes we climbed all the way UP THERE!)

But then I finally understood where the association of a moonscape came from: The mountain plateaus consisted of endless fields of white stones. And all we could see around us were high, steep hills of more white rocks. Beside the blue sky there were almost no colors and very few signs of life. It really felt more like hiking across a strange planet than a country in Europe. And like on an actual moon expedition, every step was difficult: There was no way to walk around the sharp rocks, there was no shade and the reflection of the sunlight on the white rocks was almost unbearably bright… My sisters and me hiking Croatia Abbey Road style! I was half-expecting to find a skeleton at this point…

But the sweat, the exhaustion and the hurting feet were all worth it once we finally reached the peaks of the island. Not only could we see our pretty temporary home city of Baška from above, but also the other islands in the Adriatic Sea — and we could even image seeing Italy on the horizon! The views were simply stunning! I now see Croatia in a whole different light — this country is not only perfect beaches, beautiful cobblestone streets and breathtaking waterfalls. It also has a rough natural beauty, which isn’t really appealing at first sight. But these uninviting seas of white, sharp rocks differentiate Croatia — and the whole Balkan region — so much from Western Europe that (commonly used) phrases like “Croatia is just a cheaper version of Italy” just seem totally inappropriate. Croatia is nothing like Italy. And it can also not just be reduced to pretty cities and beaches — it has a manifold and complex beauty, which is absolutely worth exploring too. I loved this glimpse beyond the picture perfect postcard Croatia and discovering a different, more edgy and less touristy side of the country.

Have you considered Croatia to be an exciting country for hiking?
Would you go hiking in Croatia?