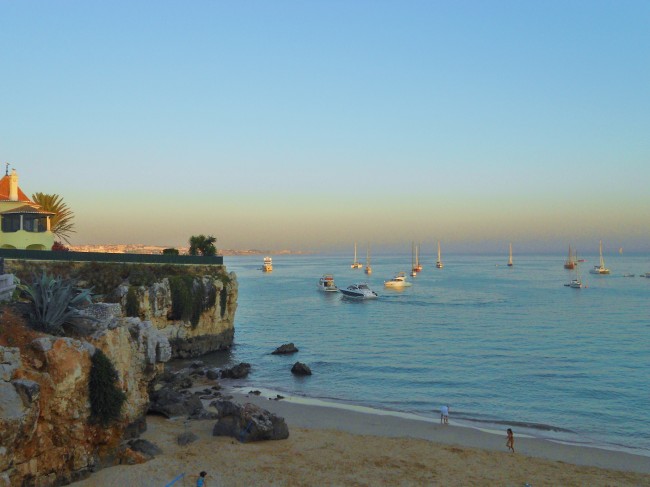 It’s been a while since I’ve written a post about Portugal, but believe me — I still have tons of Portuguese beauty to share! Like the gorgeous little city of Cascais. I discovered Cascais during my first week in Lisbon and kept returning regularly throughout my whole semester abroad, because Cascais is such a perfect little place. On public holidays, on hot Saturdays, or on those days Lisbon was a little too crowded with tourists, Cascais was just the ideal getaway for a day. Cascais is less than an hour from Lisbon by train, and riding the train along the Atlantic coast is already simply fantastic, because it sometimes feels more like being on a boat than on a train. Cascais charms you instantly with this undeniable Portuguese cuteness — cobblestone streets, houses in every possible color, the ocean always in sight, and picturesque yachts on the horizon.

The city has several little beaches which are all framed by romantic cliffs. My favorite one was the city beach — not the biggest beach, however, it’s the kind of beach the Portuguese go to on their day off: Cozy, gorgeous, with an amazing view. Leaving the beach bays behind and strolling along the Cascais’ little streets is also a wonderful way to spend your vacation in one day. It might be a bit touristy during the summer season, but the city is adorably cute and has a lot to offer when it comes to architecture, partying, and food. My favorite thing about Cascais — beside the beaches, of course — is the nature surrounding it. A little outside of the city center lies the famous Boca do Inferno, the Mouth of Hell: The “mouth” is a scary hole in the steep coast against which the mighty waves of the Atlantic Ocean crash loudly. This impressive location became infamous in the early 20th century, because the occultist Aleister Crowley staged his own death there. Since the most well-known Portuguese writer Fernando Pessoa helped him with this coup, the apparent suicide became a giant media event and the Boca do Inferno was in everybody’s mouth (no pun intended). Knowing this background story makes the huge dark opening in the rough cliffs become even more mysterious.

Watching the sunset at Boca do Inferno is the most wonderful way to experience the world’s (and Portugal’s!) beauty… where the skies are so vast, the ocean so strong, and the cliffs simply breathtaking.

Whenever you are in Lisbon and have a little more time on your hand — do yourself a favor, go to Cascais and experience the beauty of a perfect Portuguese beach city.