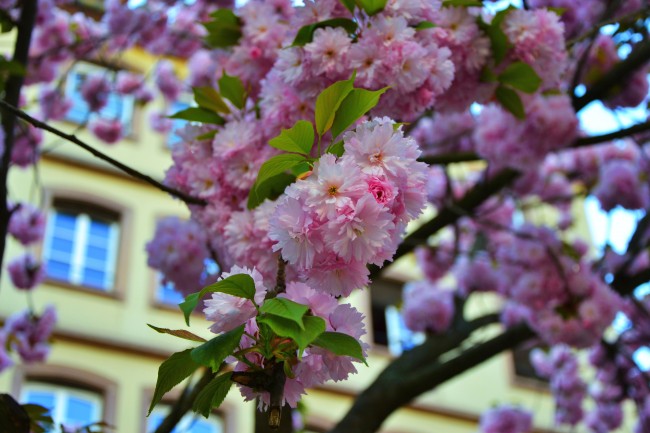 I just got back from an amazing weekend in Alsace and can’t wait to share all the beauty I encountered in this stunning French region. Alsace is a province that differentiates itself from the rest of France through food, architecture, and language. Since the region’s history is so closely intertwined with Germany, Alsace feels totally German to the French, but at the same time so very French to the Germans. The truth lies somewhere in between: The people of Alsace speak French, but the older generations also know a dialect that is incredibly close to German. The architecture combines the typical arabesque French balconies with German half-timbered houses. It almost feels like the Alsace region takes the most picturesque features of both countries and creates the most uniquely gorgeous merging. I’ve been to Alsace before and have considered it a very special and exceptionally beautiful area of France ever since, but this time it really blew my mind, because it was the very first time I experienced it during springtime. After struggling through a horribly dark winter (actual gloomy weather combined a little winter depression) I was so desperate for green trees, flowers, sunshine, and people sitting outside in cafés that I can’t find words to describe how relieved I was when spring finally arrived in Central Europe. Seeing the unmistakable signs of spring made me so utterly happy! And traveling to a beautiful destination on one of the first real spring weekends turned me into a stupidly grinning moron as soon as I arrived at Strasbourg’s station. I was so glad to be traveling again, to see flowers again, to feel warm sunshine on my face again! Hence I dedicate this Picturesque Monday to the bright green trees and colorful flowers of Alsace. To long shadows on cobblestone streets during Golden Hour and Spanish guitar players in parks. To long, delicious tarte flambée dinners with a friend: Simply to an amazing spring weekend in one of the most picturesque regions of Europe! Which European region would you choose for a perfect spring weekend getaway?