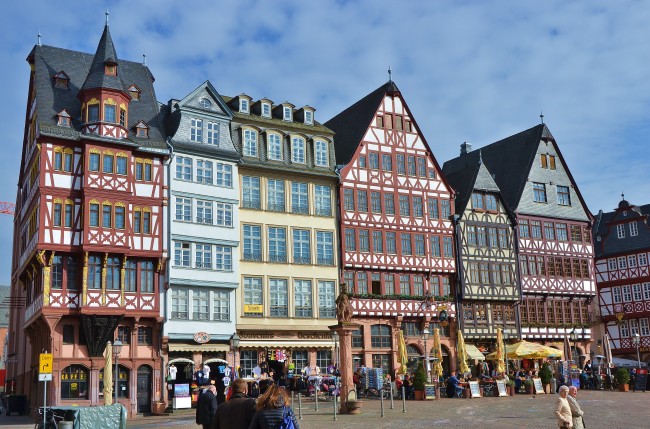 In my opinion, Frankfurt is underrated. It’s renowned as Europe’s financial capital and for being home to the third largest airport in Europe. Most travelers end up in Frankfurt, the seemingly unexciting lay-over city, sooner or later.

But Frankfurt has a whole lot more to offer. I might be biased, but I really like Frankfurt. From there I started my most life-changing travel adventures.

Frankfurt was first place I was asked to pose for a photo with a bunch of Japanese tourists. It was the first city I rode a subway all by myself (and yes, when you grow up in a tiny village in the middle of nowhere taking the subway by yourself is actually a pretty big deal). Maybe it was even in Frankfurt where I first fell in love with the vibes of a cosmopolitan metropolis — surrounded by so many languages, life styles, food varieties, and interesting people. No doubt, Frankfurt is a banking city. It has the one of most important stock exchanges worldwide, and you can feel this right away. But handsome business men in suits aren’t really a bad thing right? And if you look beyond this business-y façade, Frankfurt actually has an exciting history, a unique cuisine and some really great art museums.

Especially when it comes to architecture, Frankfurt has it all: Roman ruins, a medieval cathedral, gorgeous 18th century half-timbered houses and, of course, the famous skyscraper cityscape. I just love how old and new are so symbiotically intertwined: The skyline including the high buildings that got Frankfurt the nickname Mainhatten (after the river Main), but also a Gothic church tower. Last week spent I day in Frankfurt, and was reminded how much I love the city’s architectural diversity. Since it was Steffen’s birthday we simply pretended to be tourists, and did a lot of fun things to get to know a different side of Frankfurt. The highlight was seeing the skyline from top of one of its highest buildings — the Main Tower. An elevator takes you 54 stories high, up to a platform overlooking the whole city! Steffen obviously knows the cooler poses to go with a skyline

After experiencing this modern aspect of Frankfurt we strolled through the little cobblestone streets of the Sachsenhausen neighborhood, which is (in)famous for the rustic Apfelwein (Frankfurt’s traditional cider) restaurants — especially among bachelor parties. From there it’s only a short walk to the river Main and the area called Museumsufer (museum shore), where several museums are located. The old restaurants of Sachsenhausen On the weekends these old streets are apparently filled tipsy bachelors

By crossing one of the many bridges over the Main river we headed to the city center, which is the most iconic area of old Frankfurt. The incredibly gorgeous Römerberg square is also the place where Frankfurt’s magical Christmas market takes place. So next time you end up in Frankfurt and have a little spare time to kill — it is really worth a visit! Frankfurt is a one-of-a-kind city and I promise you won’t find anything comparable it Germany!

Have you been to Frankfurt?