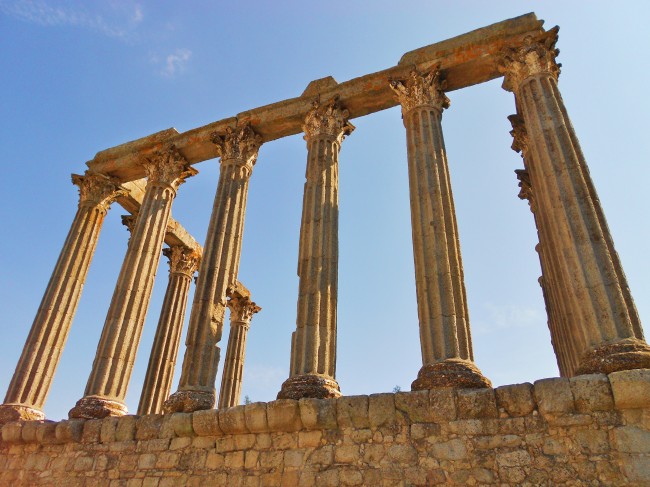 Portugal’s (architectural) history dates back until ancient Roman times. Unfortunately there nowadays is little proof of the old Roman colony Lusitania anymore. Solely one little city in the central Portuguese region of Alentejo stands out, because it is home to the ruins of an ancient Roman temple. During the Roman reign, the city of Évora began to flourish, and in the first century A.D. this Corinthian temple was built. It was partly destroyed in the following centuries, but is classified a UNESCO World Heritage Site today.

The Roman Temple of Évora

This ancient architectural highlight is surrounded by a gorgeous medieval city, which has a charmingly cozy small town feel, but also one of the most renowned universities in Portugal. Thus, it broadcasts an antiquated and dynamic atmosphere at the very same time. What I loved about Évora is that it displayed so many different architectural styles: An ancient Roman temple, a proud Romanesque church, sublime Gothic cloisters, and the playful Manuline details on the houses – all within short walking distances. A Manuline window in the city center of Évora

Walking through Évora feels like walking through a live architecture book: This little city can almost be perceived as a pars pro toto for Portugal’s entire art historical and architectural history.

If you want to authentically experience and understand Portuguese culture and history, you should definitely visit the beautiful little town of Évora!