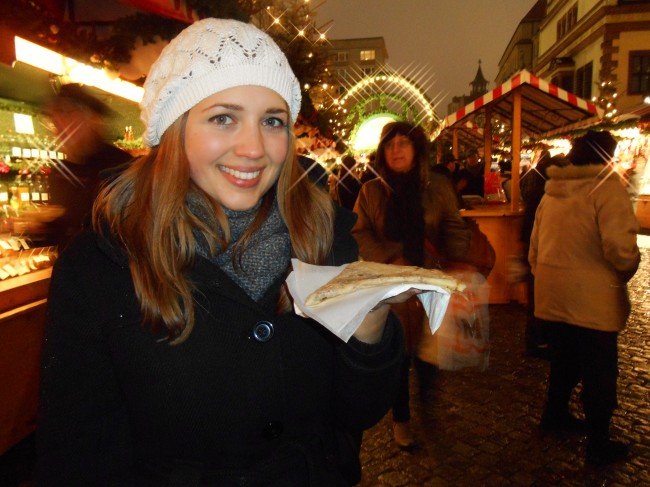 Bayreuth is a storybook Bavarian city: Houses with picturesque facades, cobblestone streets, beautiful squares. Famous Richard Wagner chose Bayreuth to stage his monumental operas there, because he considered it to be perfect for his fantastic and medieval plays. Perfect setting for a romantic Christmas market! What I ate: Dampfnudel – a huge sweet dumpling with cherry-stuffing and vanilla sauce. A heavenly combination – impossible to eat all by yourself though! My highlights: The cozy train ride through snow-covered Bavaria – and my very first gingerbread heart! Steffen bought me this one as a true Christmas market souvenir. It says “my little one”. So sweet – literally! Cologne is famous for its gorgeous Gothic cathedral, art, literature, museums, publishing houses and musicals – basically everything I truly love! I was so excited to see Cologne in the Christmas season again – and in the snow! I really was incredibly lucky to see all this Christmas beauty during the very first real snow this year! What I ate: Bratapfel mit Vanillesoße – a granola-filled baked apple with vanilla sauce. A deliciously perfect combination of Christmas flavors! My highlight: Climbing the tower of the cathedral with adorable Ashley of Ashley Abroad, and seeing one of the Christmas markets from above! With snow on top of the roofs of the little booths… a true winter wonderland! Frankfurt is THE metropolis in central Germany. Nicknamed “Mainhatten”, after the river Main, Frankfurt has the highest skyscrapers in Germany, and the third largest airport in Europe. But besides being all cosmopolitan, Frankfurt also has an exciting history since ancient times, and several art great museums. What I ate: Kartoffelpuffer mit Apfelmus – fried mashed potatoes (or potato pancakes, or latkes) with apple sauce. Hot, greasy, delicious – and ideal to warm your hands and soak up the alcohol in the Glühwein. My highlights: The Römerberg location and the most special Glühwein cups: Since Frankfurt’s local drink is apple wine, which is traditionally served in a Bembel, the cups were designed like this typical apple wine carafe. Kassel was the hometown of the famous Brothers Grimm, so it’s also known as the “Grimm-city”. Accordingly, Kassel holds a fairy tale Christmas market each year. All the booths, the little street in-between them, and most of the dishes served are named after fairy tale characters. What I ate: Schwedischer Feuerlachs mit Kartoffelsalat – Swedish “Fire-Salmon” with potato salad. The salmon is grilled on open fire, and thus has an amazing smoked flavor. For desert I had Kaiserschmarrn – an Austrian dish, comparable to little pancakes. My highlights: Fairy tale omnipresence, of course! And the Swedish mulled wine called Glögg, which had almonds and raisins in it – so good! Leipzig is a gorgeous historical city in former Eastern Germany, and I liked it right away. I had the best time exploring the pretty city center – especially knowing the Christmas market in Leipzig was founded in 1458, and therefore is the second oldest in Germany. Christmas market I visited: Leipziger Weihnachtsmarkt including the medieval market, the Finnish market, and the famous market in front of the city hall. What I ate: Fresh baked dark bread filled with cheese, topped with sour cream, herbs, and radish. I bought it on one of the medieval booths, never having seen anything similar at another market before. Tasted nice, but I think I loved the thought of it being a “authentically medieval” dish the most. My highlights: The medieval market section right next to Auerbachs Keller, a location in Goethe’s “Faust” (middle ages + literature = my heaven). The gorgeous old carousel; and the Finnish market, where you could drink your mulled wine in a huge tent next to a fire – incredibly cozy and Christmassy! Every Christmas market I went to was special in its own way, and I would recommend a trip to all of the cities above in the Christmas season. My personal favorite German Christmas market was the one in Leipzig, because it surprised me the most and had some special eats and attractions I didn’t see at any other market.

1. Wear as many pairs of socks as you can possibly squeeze into your shoes.

3. Share your food! Christmas markets just have too many amazing food options – if you want try as much as possible, only get one serving and share it with a friend. Did you visit any German Christmas markets this season?
Which one was your favorite?
Did you find any amazing food or drink that I didn’t try?