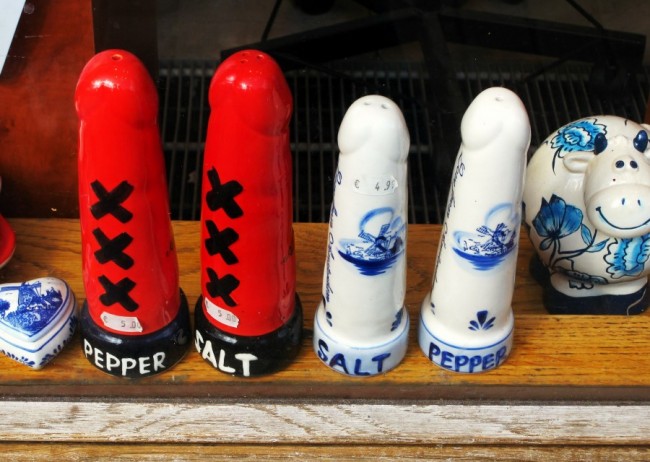 After finally having found a place to stay in Zandvoort  Steffen and I were excited to explore the (in)famous capital of the Netherlands: Amsterdam has a crazy reputation. It’s all about drugs, sex and beer, but at the same time Amsterdam has (had) a huge influence in the art scene. The regular train connection from Zandvoort took us right into the gorgeous central station of Amsterdam, which is already a first major sight to check out. After that we wanted to experience the city by foot and boat. Those are certainly the best ways to get to know the city. (Renting a bike would have been an option, but bikes are just not for me – sorry!) We strolled across the city, inhaled the vibes and, umm, a lot of other things… we saw the famous pretty streets, little wooden boats in the Grachten, high tourists – and decided on our itinerary for the next days: One major art museum for me, two fun “museums” Steffen would also enjoy (as you know, he can only manage a certain amount of “old art”) and two outdoorsy experiences to get to know the city from different perspectives. So, here’s what we did in Amsterdam:

Art and culture: The Rijks Museum

Amsterdam has several great museums, but I had to choose one: The city is so expensive and visiting cultural institutions of any kind has a severe impact on a travel fund. Each museum fee is at least 12 – 15 € – no discounts for students or art historians possible!

I chose Rijks Museum, because they exhibit a lot of the famous late medieval and early modern Dutch artists like Rembrandt, Van Dyck and Vermeer (whom I really love!)… Even if you aren’t very much interested in early modern art – the Rijks Museum provides so much European history through pictures that you just shouldn’t miss it! And I’m pretty sure absolutely everyone would recognize a painting like Rembrandt’s Night Watch… A (touristy) boat tour through the famous canals, the Grachten, was a perfect way to get to know Amsterdam better: Walking on the many bridges is one thing – but going underneath them by boat gives you a whole new perspective… All sights were explained on the tour and we were told some exciting (hi)stories about the city of Amsterdam throughout the centuries – ever wondered how people moved their furniture into the large houses with the small doors and the water so close by? Well, we now know how… Another great thing to see in Amsterdam was the Vondelpark: A vast city park where you could spend days exploring all the different beautiful tiny forests, meadows and little lakes. Oh, and one fun fact: The Vondelpark is the only park in Europe where you are allowed to have sex in public at night without it being a felony…

Seems like everything in Amsterdam has a sexual twist to it. This, of course, leads us directly to the fun museums –

Fun: The Museum of Sex

Of course, located very close to the central station, pretty much every tourist passes by the Museum of Sex. I had been to one in Barcelona two years before, but Steffen really wanted to go, so we did… Where else to go to a Sex Museum if not Amsterdam of all places? I must admit, I still can’t go without giggling eventually – but some things were just too hilarious! If you need a good laugh, go there too! The one and only – Heineken Experience

I never thought I would have fun at a place like this, but it was actually one of the best things we did in Amsterdam… I know, I know, super touristy and pseudo-Dutch, but I really enjoyed it!

Heineken Experience is not an actual museum it is more like a fun beer theme park: You can touch everything, play around with everything, take pictures of everything and taste everything (half-finished beer… ugh!). They even have a little 4D-movie theater where you re-enact the production steps of beer, and many other ways to teach you about brewery technologies in a playful fun way. Personally, I was a huge fan of the old factory buildings with the huge Art Deco windows and large retro copper caldrons. And the ice cold free beer at the bar in the end didn’t suck either. Actually, I guess it was the best beer I have ever had (and this doesn’t come easily from a German!).