My Semester Abroad in an Undeservingly Short Summary 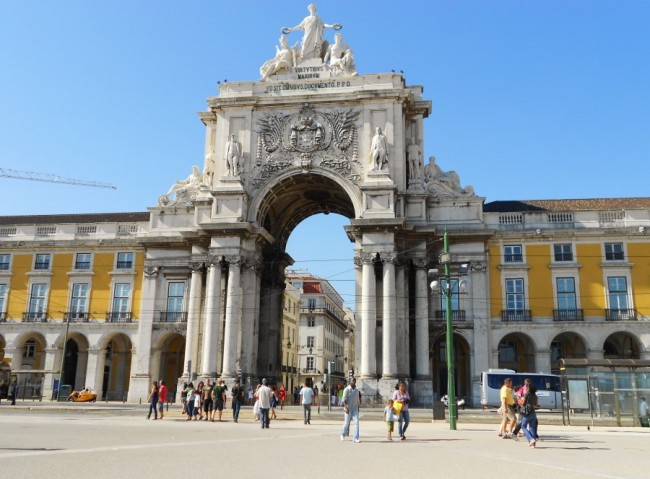 My Semester Abroad in an Undeservingly Short Summary

Oh, how should I ever be able to summarize my semester in Portugal adequately, and squeeze one little blog post – even my original tumblr on my time in Lisbon didn’t even cover half the wonderful experiences I had in those sun-filled five months.

I will try to keep it short: After a rather elaborate application process, I got offered a place to study at Universidade Nova de Lisboa in the fall semester 2011/2012. Having fallen in love with Portugal, and especially Lisbon, during a vacation in 2008, I always knew that I would eventually have to come back for a longer period of time. So I started learning Portuguese, and when applying for my Master’s degree, I purposely choose a course of studies which would allow me to study abroad in Portugal.

The Erasmus program offers this great opportunity to all students in Europe – without having to pay any tuition, but even receiving a financial aid to cover the additional expenses of living a foreign country. Thus, I had no doubts that I would maybe never have such an awesome opportunity to actually live an authentic life in another country again — I just had to capture it! In September 2011, I left for Portugal – without knowing where I would be staying for the next half year, without a student ID (I received it “only” three months later), without having sufficient language skills to survive the Portuguese everyday life (I had studied Brazilian Portuguese before, and was yet about to learn how very different these languages are. Plus, I had been a liiiittle lazy with my vocab).

The only thing that was settled was my stay for the very first week: I booked a room at gorgeous Lisbon Old Town Hostel – the best choice I could have made! The friendly staff was prepared for Erasmus students looking for housing, and said that I could leave earlier and get my money back, or stay longer in case I wouldn’t find anything. This took a load off my mind.

But how do you look for a place to live in a foreign city with such a dense time frame? I had exactly one week before classes started! There were even horrifying rumors that sometimes the rooms rented to exchange students were without windows, or in unsafer areas of Lisbon… Luckily, there were quite a few other Erasmus students staying at Old Town Hostel so we could exchange tips and experiences. Also, the staff was very helpful in pointing out good neighborhoods to live in. So, after finding my university, applying for a Viva Viagem monthly metro ticket, signing up for courses, doing my language placement test (oh yeah, don’t ask), and getting all necessary signatures on the first day, I was more or less prepared for the Lisbon housing market… In the end, I was really lucky, because I only looked at four apartments until I found something perfectly suitable. Most Erasmus students checked out at least ten rooms until they found some place with windows, and without cockroaches.

I also had some absurd moments while wandering through the city with a way-too-large paper map. Like this one time when the huge sweaty landlord invited me for a beer on the back porch, wanted to kiss me on the cheeks, and took my backpack to place it on the other side of the table — really, this scared the hell out of me! Watch out for creepy landlords! Good thing I didn’t move in here.

But when I first entered my future apartment, I knew I wanted to live there and nowhere else. The flat mates Rui and Victoria were super nice, and Portuguese (most Erasmus students live with other Erasmus students, and thus barely get a glimpse into actual Portuguese life) and about my age. And they didn’t just want to share an apartment with somebody, but they were rather looking for a friend to move in. Just perfect! And the room not only had a window, but even a balcony! When Victoria called me later that night, I was so excited and so relieved – and I had actually succeeded in finding an apartment in only four days! The view from “my” balcony! Lucky me!

On the very first day I moved in, my roommates invited me along to a birthday party, and introduced me to all of their friends. I felt so welcomed, and although I understood little to nothing in the beginning, these people influenced my impression of wonderful Portugal in an even more positive way. Best roommates I could have wished for!

Of course being a student, you eventually get a little stuck in your everyday life full of giving presentations, writing papers, and falling asleep in history class (which I really did). But most of the time I just had to pinch and remind myself how incredibly lucky I was to study in such a breathtakingly beautiful city! I met wonderful, interesting people from all over the world, I learned so much about myself,and what actually living in another country means… and I loved every little detail about Portugal! Really, this semester abroad has been the most precious, enriching experience I ever had. Have you studied abroad?