Romania – Of Garlic, Bloodsuckers, and a Wedding 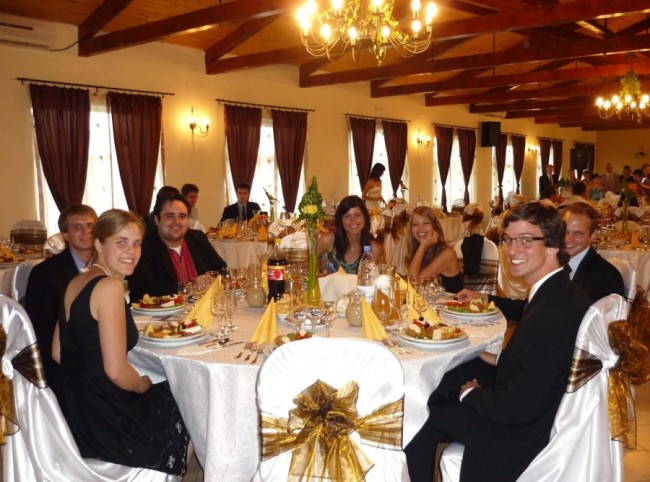 Romania – Of Garlic, Bloodsuckers, and a Wedding

Love writes the craziest travel stories, and this is one of them:

Christian was in my class in high school and we have a mutual friend, Diane, whose family is from Romania. Since Christian was really interested in this country, he went there for the summer during his final years of school. Diane introduced him to one of her best Romanian friends, Claudia, and her and Christian became friends quickly. Although they could only talk to each other in English, they kept talking via chat and email after he was long back in Germany… They soon fell in love, and started this seemingly insane long distance relationship, which survived all those geographical and cultural distances. When I met Christian for coffee about two or three years after our high school graduation, he told me about their engagement, their future plans to live together in Germany, and their upcoming wedding in Alba Iulia, Romania, in August 2010. He invited me to come, but at the time I didn’t really think I would manage to go. After stressing all year about my nerve-racking Bachelor’s thesis, however, I decided that I really needed a weekend away from Germany.

Diane’s family has a large house in Alba Iulia, and she invited me and a bunch of other people to stay with her for the wedding weekend. In the end, we were more than ten German friends flying to Romania to attend a German-Romanian wedding, and it turned out to be one of my most fun weekends ever. When I walked out of the airport in Cluj-Napoca I was so excited about what my first impression of Romania was going to be. To be honest — I knew almost nothing about the country and thus had no idea what to expect. Well, besides that the place we were headed to lies in former Transylvania… and you know the stories guys, I was about to enter the home of Dracula!

The first impression, besides the very warm weather, was the city of Cluj, which was incredibly ugly and sadly fulfilled the all the Western European expectations of the East being all gray in gray and horribly poor. But as we drove from Cluj to Alba Iulia, I realized how beautiful and wonderfully green the Romanian landscape is. We passed cute little villages surrounded by soft hills, and people selling fresh fruit and vegetables from their backyards everywhere. However, the poverty of some villagers and the Roma was still to be seen all about.

After a getting settled in at Diane’s family’s house and a warm welcome of the almost newlyweds and their friends and family, we were shown around Alba Iulia by Diane as our personal guide the next day. Was I especially liked was the typical farmer’s market with fruit and veggies — the tomatoes were redder than red, the eggplants were as huge as pumpkins, and the nectarines were the most delicious ones I have ever tasted. Then it was already time for getting ready for the wedding. We were taken to wedding location by a friend of Diane, who’s risky driving style on the holey Romanian streets left quite an enduring impression. The beautiful wedding ceremony was held in German and Romanian, the vows were exchanged in English — I loved the service for being so multi-lingual! I was really touched by the devotedness of Christian, Claudia, and all the international friends who flew to Romania to take part in the ceremony, which even included a hilarious wedding entrance dance by groom and bridal party. After the ceremony, the reception was mainly centered on the food — and there was plenty! I mean it. We were served at least six courses and tables were full of little cookies… just in case you needed to bridge the time in-between the courses (which you didn’t, but those little cookies were just way too good anyways). Oh, and at least one cliché of Transylvania could be verified — the people there do love their garlic. Very intense, very tasty! Besides eating a lot and dancing all night, there also were games, where I was unexpectedly chosen to apply lipstick to a guy from our German group — blindfolded! But all the guests seemed to have a great laugh about it, and so this scene even made it into the official wedding photos! The next day was filled with more sightseeing in Alba Iulia – I was really excited to enter an orthodox church for the first time to learn about their way of using images and architecture, which is so different from what I used to study so far. During the last night I learned that Transylvania still has nasty bloodsuckers of some sort: The mosquitos were so annoying that Diane, who I shared a room with, and I couldn’t sleep for a second. At least I brought some itchy souvenirs and also many, many wonderful memories back home with me.

The photos were taken by Saskia and Jan Philip from our German travel group, who generously allowed me to use them here, since I didn’t own a camera back then.