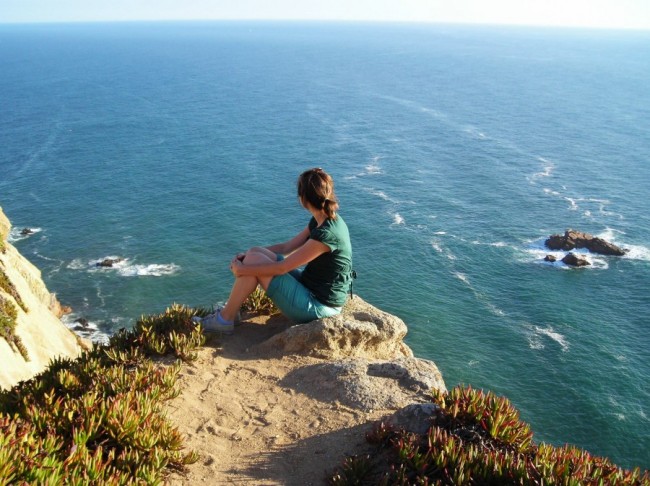 My good friend Carola and I had been thinking about a grand vacation for a while back in 2008, when she remembered that she met a Portuguese girl at an international youth event a few years back: Cláudia had invited her to come visit her in her home town Porto, in the north of Portugal, and we more or less spontaneously booked our flights. We naturally also wanted to spend some time in Portugal’s capital Lisbon, so we booked a one-country Eurail ticket to be able to spend some time in both places, and get around easily.

In Lisbon, we explored all the major sights (which is sort of manageable in two and a half days, because Lisbon is a comparably small capital), made a day trip to the fairy tale city of Sintra and impressive Cabo da Roca, and just couldn’t fully conceive how incredibly gorgeous Portugalis!

What was, however, a little special about this trip was that neither Carola, nor me owned a camera back then. We bought two of those cheap disposable cameras at the airport, but we were pretty sure those pictures wouldn’t turn out good at all. So the only thing we really had to ‘take pictures’ was our memory — and our sketch-pads, which we thus used frequently.

But then, the best idea came to us when we were climbing up the towers of the Castelo, Lisbon’s famous castle and landmark: We realized we were surrounded by tourists with fancy digital cameras — why not ask them to take our picture and send them to us via email?

We asked a nice couple from Austria and — they were absolutely pleased to help! Can you imagine how exciting it is to not be sure if there are any nice pictorial memories of your vacation, and then you come home to find a beautiful picture like this one in your email inbox?

It restored my belief in mankind that so many people were nice enough to take our picture, keep our email addresses and managed to send the photos to us!

Honestly, not one single person refused our request, or forgot to send us the pictures! This was an incredibly great experience. And these photos are definitely my all time favorite travel pictures, because behind every picture is a real story! After four wonderful inspiring days full of culture and sun in Lisbon, we took our train to Porto where we were warmly welcomed by Cláudia and her mom. They live in Vila Nova de Gaia, which lies on the other side of the Douro River, vis-à-vis Porto, in a little apartment – but of course they had prepared the largest and nicest bedroom for us girls! (Even among the Portuguese, the people from Porto are known as the very most hospitable ones.)

During the next days we became part of the a Portuguese family — we were shown around in the city and taken to beach, we joined the family for home-cooked dinners and cozy evenings in the living room. And although we couldn’t speak the language, we felt completely integrated. The only family member I didn’t really get along with was their little dog Brownie, who had a very, very weird thing for my feet and kept gnawing and attacking my toes…  But besides that I never thought it was possible to feel at home somewhere so quickly. We had the best possible time and fell in love with Porto right away. The uncountable churches covered in blue and white tiles, the unmistakable flair of a vibrant student city, the tiny streets full of beautifully ruinous houses, and the Atlantic so close-by… Porto was simply stunning! The absolute highlight, however, was or last night when Cláudia’s generous family invited us along to their grandmother’s birthday! I have never eaten that much amazing food in my life! Or had such an ominous amount of delicious Vinho do Porto. And I have never ever laughed so hard about conversations I could barely follow! But this Portuguese family was so hilariously entertaining even just in the way they spoke to each other — and eventually threw shrimp peels across the way too small living room… Really, this was one of my best nights ever! I just can’t really describe it, but ever since those days in Porto, in which I felt so very much at home, the Portuguese have had such a big place in my heart that I was determined to return to this wonderful county someday.

As soon as I came home, I signed up for a Portuguese language class, and started looking for a Master’s degree that would include the possibility to spend a semester in Portugal.

Portugal was truly love at first sight and my love for this little country has grown stronger ever since.