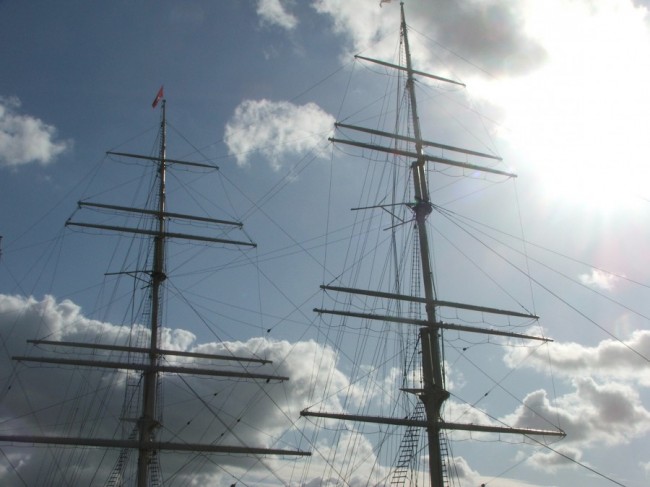 After traveling mainly as far as possible (though mostly within the European borders), it was about time I would go get to know my home country a little better. Of course, I moved around a lot already, and had made trips to Munich, Berlin, or Schloss Neuschwanstein with school and my parents, but there was one place that I had been dying to see for a long time: Hamburg. So, the boyfriend Steffen and I decided to plan a fall getaway weekend to Germany’s second largest city back in October 2008.

Steffen dug up a cheap hotel, located on the Reeperbahn, probably the best nightlife neighborhood in whole Germany, right in the middle of Hamburg’s most infamous red-light district. Although this location implied that it wasn’t going to be very quiet at night and the hotel might have been a bordello in former times (suspiciously long, mazy hallways!), I was really surprised you could find such clean rooms and a decent breakfast for only 17 € a night in such a prominent area. The city of Gießen, where I was doing my Bachelor’s degree at the time, had a direct train connection to Hamburg, so getting there was pretty easy, stress-free, and budget-friendly.

Hamburg is known for strong wind and a lot of rain, and we were a little afraid that October wasn’t really the best time to go there, but when we arrived the city welcomed us with golden fall sunshine and mild temperatures – and I just instantly fell in love with Hamburg! The famous Landungsbrücken, the harbor sidewalk along the Elbe, is great for an amazing first impression of the city: Water, wind, seagulls, all kinds of boats and ships – and of course, the Fischbrötchen, a roll with any chosen kind of fresh-caught fish or crab, couldn’t be better in any other place in the world. We strolled along the Landungsbrücken up to the Speicherstadt, which used to be Hamburg’s harbor district, where the city’s trading goods were stored and soled.

The large, old brick warehouses and attics have nowadays become Hamburg’s fanciest area. If you look for any artistic production, Germany’s best acting schools, or Germany’s priciest lofts, you will find them in the Speicherstadt. And honestly, if I ever happen to be rich, I am so going to buy a loft apartment there!

Next thing I needed to see were the ruins of the St. Nikolai church, which was destroyed during and after the Second World War. You may have realized that I am a sucker for churches – and I love church ruins even more!

Any admirer of (neo-)Gothic architecture will be dazzled because the ruins of St. Nikolai which are so sad and so beautiful at the same time. Next important stops on our Hamburg itinerary: The Binnenalster, the river turning Hamburg into the city with the most bridges in Europe (seriously, Hamburg has more bridges than Amsterdam and Venice combined!) and the close-by city hall, which altogether can be considered the heart of the city. Then, yet another art historic highlight for me: The Hamburger Kunsthalle, a museum that especially features early modern and romanticist art. Some of the paintings there are so famous that even Steffen, the artistic philistine (just kidding, I think), recognized quite a few.

In return, Steffen expected of me to go to Hamburg Dudgeon a kind of adventurous scary history theme park, which also exists in other European cities like Amsterdam, or London.

I wasn’t convinced to go there at all, because it seemed to be way too artificially touristic and super expensive. Plus, I am not such a big fan of free-fall-towers. Or haunted houses, for that matter. But I owed him (for all the art I forced upon him), so I went, and realized that you could actually learn a lot about the city of Hamburg and its history during the time of inquisition, the pirates, or the plague. Of course, some of the props and actors did scare the hell out of me, but in the end it was really worth it! Naturally, we also had two crazy nights out on the Reeperbahn, listening to great live music, checking out a few of the endless bars and clubs, and drinking Astra, the most famous (but sadly crappy-tasting) local beer.

And – as a reward for sticking with me up until here, I’m going to share this embarrassing moment with you now – we went into one of Hamburg’s infamous sex shops, where you can buy all kinds of weird toys, outfits, and instruction books. You know, when you are out on the Reeperbahn you just have to do that. These shops are open pretty much all night and they are used to giggling tourists. Which probably was the reason I was asked for my ID when I tried to enter the store… Imagine being loudly stopped by a security guy when hesitantly sneaking into a sex shop! So embarrassing! Pretty sure I won’t be entering this kind of shops until I actually have grey hair and really look old enough to be in a place like that!

Anyways, what I absolutely liked best was the climb up to Hamburg’s landmark, the church tower nicknamed Michel – the view over the harbor was just breathtaking! This visit was just way too short… I so need to come back for a longer period of time to get a better glimpse into Hamburg’s artistic scene and its year-round beauty, oh, and of course, to settle down in my beautiful Speicherstadt apartment with a view on the Elbe. You know, when I’m finally rich.