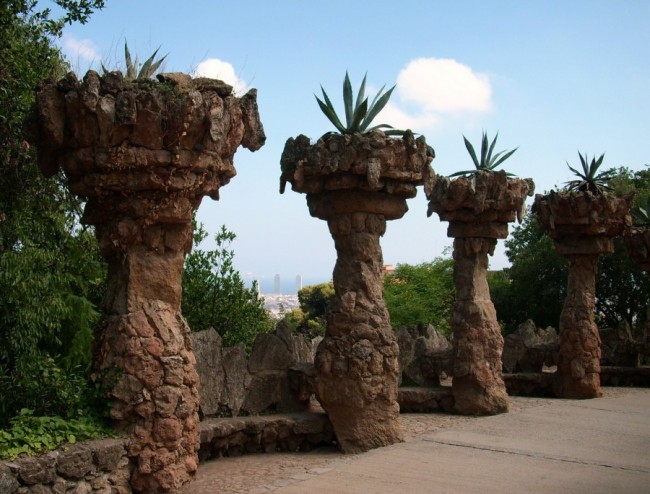 To be honest, this trip was one of my first real city getaways and I’ve made a few mistakes back then: Choosing the wrong accommodation, the wrong flight company, the wrong priorities when it came to food. But traveling is something you can only learn along the way. This trip was still a lot of fun, but I know we should have done some things differently. What do you think?

After our disastrous road trip to France Iris and I decided that we needed to do something a little more structured for our summer 2007 vacation. However, we still were very budget conscious, and still wanted to go to a place where we would have an ideal combination of culture and beach: And what would fit any better than Barcelona?

We found a cheap return flight for only 30 € each, thus thought we could splurge a little on accommodation this time. Iris found a fancy four-star hotel, which had just opened so that the prices were more or less affordable, and since my only wish was to never ever sleep in a tent again, I was absolutely satisfied with her choice.

Besides booking flight and hotel in advance, we also informed ourselves about the city we were going to — which was pretty revolutionary for us back than! Iris booked the Barcelona Card, which offers percentages at sight-seeing places and free use of public transportation and I read a whole travel guide on Barcelona and its highlights. So for the first time, we actually felt really well prepared. And we really hoped that this time we would be good-smelling and well-informed travelers.

Flying Ryanair however, can be tricky, so when we reached the airport of Girona (1,5 hour bus drive out of Barcelona) we at first had no idea how we should actually get into the city. Of course, Ryanair offered a direct bus into the city, but the return ticket was more than 20 € for each of us (today I know that there also is a train, which costs less than 3 ). (Oh and yes, we were totally lured into the Ryanair-trap thinking Girona was just an unspectacular airport town. Big mistake, apparently.)

When we finally arrived at our hotel, we learned that young German tourists are not trustworthy enough to stay in a Spanish hotel all by themselves, so we had to pay a 50€ deposit, which I found really questionable, but there was nothing to do about that. Needless to say that this deposit didn’t have the best impact on our cash fund. (Broke again. Iris, am I sensing a theme here?) Since we wanted to sleep fancy this time, we didn’t book breakfast at the hotel (which I also will never do again!), but we usually went to a close-by mall to buy cheap snacks at a supermarket. Way to save money, but today I’m convinced that we shouldn’t have been so stingy when it came to food – Spanish food is just way too good to miss out on!

The first thing we did after figuring out where to go to get food, was hurrying to the beach. Barcelona is THE European city with the largest city beach, and we were so excited to see the Mediterranean again. The beach front really is breathtaking, and we strolled along almost the whole four kilometers of Barcelona’s seafront… enjoying the sun, the roar of the surf, the people, the music – the Iberian life style. After a night on our wonderfully comfortable, “non-tenty” four-star-hotel-mattresses we began our real touristic exploring of the city — we walked along the famous boulevard Las Ramblas, where we tried to inhale Spanish life style (though in August its mostly tourists pretending to be Spanish sitting in the street cafés eating over-priced food, but well — it did look nice). We took a boat trip along the coast and the harbor of Barcelona, which was free for holders of the Barcelona Card, and we really loved this relaxing kind of sightseeing — where working on our tan was included, too.

Of course, we also went to see Gaudí’s work of a lifetime: The Sagrada Família. The breathtaking church is even astonishing from afar. You could spend hours discovering playful details and abundant ornament. However, the tourist industry really takes its advantages out of this architectural gem: The admission fee was 8,50 € (I hear nowadays it’s even twice as much) and you would have to wait in line for at least two hours to get in. The queue was unprotected from the sun, and dozens of signs read that you are most likely going to be pickpocketed while waiting there. Thus, we were (sort of) satisfied admiring the church from the outside, and taking posing pictures in front of the fence. As a soon-to-be-art-historian with a severe middle ages obsession, I completely fell in love with one of the other famous churches of Barcelona, La Catedral (de la Santa Creu i Santa Eulàlia). The Catedral is this kind of church with such beauty and spiritual aura, that it almost makes you cry (medieval churches tend to have this effect on me, anyways). What struck me especially was the cloister, which even increased the atmosphere of sacredness and meditation, and consequently made it possible to blank all the noises of tourists and their cameras by substituting it with mere beauty and stillness.

The next spot on our itinerary for top-sights-to-see in Barcelona naturally embraces Parc Güell with the famous Gaudí steps and platforms at the entrance. It is kind of a nice workout to get up there (there are a few escalators on the way up though), but the amazing view over all of Barcelona and the sea is totally worth it. And against the impressions spread by travel guides and Woody Allen movies, the park is actually huge and only the smallest part was architecturally designed by Gaudí. Iris and I spent a few hours in the actual park writing postcards and drawing, before we confronted ourselves with the touristic crowd in the “Gaudí-part”. And well, we had to admit, the travel guides and brochures did not lie — it really is incredibly beautiful how Gaudís rolling architectural forms and the colorful tiles combine with the view of Barcelona and the blue sky of Spain.

If visited and admired Parc Güell successfully, next on the list would be to see the magic fountain show at Plaça d’Espanya taking place every night, which really is a magical assemblage of lights, colors, and music — given you’re not allergic to being surrounded by cuddling couples in this pseudo-romantic setting.

Barcelona is a city full of art, and you can be sure to find a museum for everybody’s taste. I was very excited to visit the Picasso museum. Although I don’t really like Picasso (I have some trouble with modern art from time to time), I was amazed to see that he actually was a really talented artist and obviously just refrained from painting realistically to make a point, not just because he couldn’t do any better. The Picasso museum in Barcelona features primarily his early works and therefore it shows how Picasso developed the style he is nowadays known for in a very plausible way.

But since I can literally feel how you get all bored by constantly reading about art and architecture, I will just shortly mention what museum Iris chose to see (okay, maybe I was a little bit curious, too): The Museum of Sex (and if you just scrolled down this post to see the pictures and just stopped here, because the word “sex” caught your eye – shame on you!). Of course, this museum was probably founded solely for touristic purposes, since the history of sex can’t be connected to Barcelona anymore than to any other place in the world now, can it?

On our last day, Iris uttered the wish to see the botanic garden, which I considered to be boring at first, but I ended up really liking it. The botanic garden is a little further away from the city center and tourist-deserted, which is rather rare in Barcelona in the middle of the touristic summer season. So, we took a little botanic trip around the world far away from all the usual sights – and I surprisingly really enjoyed being surrounded by exotic plants and the Spanish sun. I may have left out the tiny detail that we stayed in Barcelona for four whole days, but only booked three nights at that fancy hotel, right? Yeah, well, since the flight back was scheduled for around sevenish in the morning (a typical Ryanair problem), and we still hadn’t given up on our desire to have at least some crazy travel experience, we decided to spend the night at the Girona airport. What else. The last shuttle bus from Barcelona to Girona left around nine in the evening (and we almost didn’t make it, so that we nearly had to spend the night at some dubious bus stop), and we could try to sleep at the airport for eight lovely hours.

Whereas sleeping at the airport may be some pseudo-authentic travel experience, I really wouldn’t recommend to do it at this tiny airport in Girona, because there is only one cafeteria (which closes at night), no book store and honestly nothing to see, or to wander to in case you can’t sleep… and a whole night of doing nothing can be soooo very, very long. Anyways, at least, I can tick “spend a night at the airport” off my travel bucket list. All in all, I really liked Barcelona, we did have a great time, and I definitely have to come back, because it seems that I have missed out on some great Spanish food, some wild Spanish partying, and the gorgeous city of Girona. And can you believe I didn’t have one little sip of Sangria during the whole stay?!