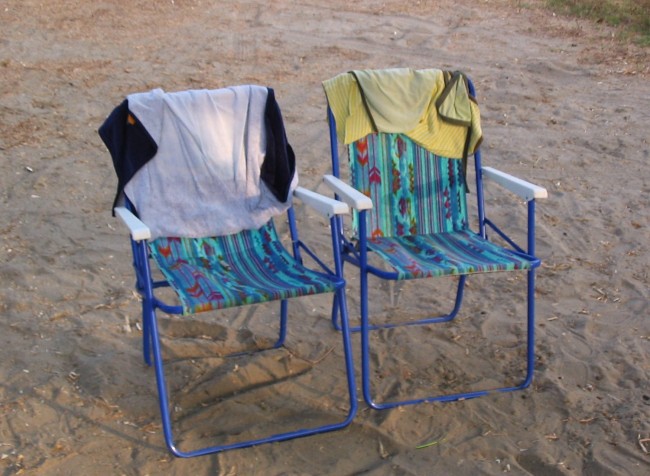 The Insane Road Trip through France Part III: Camargue region and the Mediterranean!

After Iris and I had spent our second night in the Avignon area, we left to drive further south, towards the Mediterranean.

On our way, we stopped to see the Nîmes, which used to be a relevant dwelling during the time of the Roman Empire, which still can be seen by several Roman relics such as the prominent amphitheater in the city center (where we fortunately didn’t even have to pay an admission fee to see it from the inside!). After the two days of culturally motivated traveling, we really longed to see the sea and to finally relax on the beach, so I navigated us to a little city I had once heard my mom talk about. She had been there when she was young, too, and thus recommended Saintes-Maries-de-la-Mer, because it was a cute little town and very close to the beach.

We found a four-star camp ground (just so you know, I really think that stars don’t assure ANYTHING in France), and for the first time we got to choose our own actual camp spot. We considered us really lucky —  at first.

The sandy ground made it almost impossible to put the tent pegs into the ground (only losers would bring a hammer to camping, right?!), and after only a few hours the stupid sand was basically everywhere. Nonetheless, we came to see the beach, and that’s what we did! But after the first excitement passed, there really wasn’t much to do. We spent a few hours on the beach every day, but we couldn’t do anything else, because we didn’t have enough cash, and it was so incredibly hot that we just waited for the time to go by.

We developed the creepy habit of sitting in our two camping chairs in the shade watching our camping neighbors, since we couldn’t think of anything else to do. And we really did not want to drive home too early, because then we would have proved all the people, who didn’t believe we could make it, right. So we stayed. And waited. And watched.

Only one little thing brought action into our apathetic camping attitude: Saintes-Maries-de-la-Mer is located the region called Camargue. We learned that Camargue is known for two things: Its racehorses — and its mosquitos. Up until then, I was convinced that there are no mosquitos close to the coastline, because they don’t like the weather conditions or whatever. But in Camargue, the mosquitos were so horribly aggressive that they would attack you in broad daylight, even when you are wide awake and covered in mosquito protection spray. So, when we weren’t watching our neighbors putting their laundry up, we counted our itchy mosquito bites to kill time… After three long days, and three even longer nights, because the heat and the mosquitos made it just impossible to sleep, we finally packed our things and drove back to Germany — to hot meals and clean sinks (without frogs in them)!

I think I have never been so happy to come back to Germany. But this trip, as crazy as it was, really taught me a lot: As good as it might have been for travel stories (my mom still laughs her butt off whenever I refer to this trip), a vacation is a whole lot more relaxing when you actually plan at least a little in advance.

Maybe we could have been way more spontaneous, if we had gotten a recent map and a list of good camp grounds. We made too many mistakes to count — but we learned our lesson. Iris and I improved our traveling skills ever since, and in the meantime she has even become one of my farthest-traveled friends — maybe even due to what she learned on our insane, but enlightening road trip through France… Oh, and as we drove towards the sunrise on this last day in Southern France around six in the morning — for a while I wasn’t even sure if it was a vision due to hunger and fatigue — I even had one of my most wonderful travel experiences: Flocking flamingos in the marshlands of Camargue! Flamigos as far as the eye could see! A sea of pink birds softly caressed by the rising sun… Magical — and the very best possible end to this insane trip.