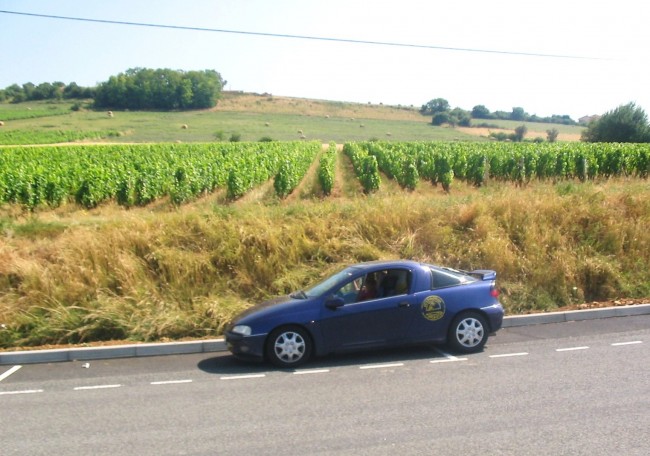 After our first night stop in the Rhône-Alpes region we drove further south. Slowly, but steadily it was getting hotter and hotter. At some point on the road south we had 52 degrees in our car — which did not have air conditioning!

Even with the windows wide open and a constant air flow, it did still just feel like sitting in front of a blow-dryer. We stopped at gas stations along the road every once in a while, because they sometimes had cold water drizzle showers, but that barely helped for a minute or two… afterwards the heat was even more unbearable.

By travelling further into France, we also had to realize that it had been THE worst idea to exchange all my money for Traveler’s Cheques – apparently not a single shop or gas station in France accepts those checks, although we tried to use them all the time. So in the end, we only had Iris’ cash to pay for food, gas, camping, and road tolls, which of course was not sufficient at all.

The next area we were headed for was Provence and the city of Avignon. I was really excited to see the proud southern city, where the popes lived in the late Middle Ages. We found a camp ground close to Avignon, and decided to stay there for two nights, to give us some time to explore the area. Particularly, we were getting a little annoyed with sitting in the hot car for hours.

Yet again, we only got a tiny piece of stony meadow of the “emergency capacities” to build our tent on. At least we had been smart enough to bring our own toilet paper, which was not provided there. But regarding all the other stuff one could need to survive on a camp ground: We really hadn’t thought it all through: That we would long for a hot meal eventually, for example. All the other campers had kitchens in their trailers, or at least brought stoves to cook on… we brought nothing. And since we did not have enough money, we could not afford to eat out. So we only had cereal and baguette. FOR DAYS.

Oh, and did I mention that the freezer broke? Seemingly, the car wasn’t strong enough to keep it going… so the cheese to have on the baguette melted, the water we needed to hydrate ourselves in the unendurable heat was almost boiling, and the milk we wanted to use for our cereal went bad.

Soon we found us being on a “prison diet”: (Hot) Water and bread. That was all we could afford, and what couldn’t go bad in the heat either. So we sat on our two chairs in the shade, pretending not be hungry when the whole camping ground smelled like delicious food around lunch time. We tried to distract ourselves from being hungry and frustrated about our crappy planning with sightseeing. We drove into the city of Avignon to see the famous palace of the popes and the Pont d’Avignon. The huge, impressive Gothic palace in the center of the city really did take my breath away. The Palais des Papes was proclaimed UNESCO World Heritage in the 90ies, and although I couldn’t really afford it, I had to go in and do the audio guide tour, to satisfy the future art historian in me. Due to our money problem we also had to abdicate a walk on the famous medieval half bridge protruding onto the river Rhône, but luckily you can also see it from afar. We strolled a little longer through the gorgeous city, until we decided that didn’t want our poor little German car to be unsupervised any longer (maybe we were just a little bit paranoid).

But when we tried to leave Avignon, we again completely lost our way. And then suddenly the air flow tore our stupid, old, useless paper map apart. And our water bottles were full of sticky melted cheese. And I had never been so damn hot in my whole life. So when Iris got out her video camera to document this moment of complete desperation, I had my one and only nervous vacation breakdown. I really want to spare you the details, but Iris called me “Rumpelstiltskin” ever since.

After finally finding our way back to the camp ground, making up, and getting some rest, we planned our next day trip to the most famous aqueduct in France. The Pont du Gard (which is by the way said to have been the inspiration for the 5-Euro-note design), is also a part of the UNESCO World Heritage, and one of Southern France’s most important sights. The aqueduct was built in the first century B. C. to deliver water to the city of Nîmes, and is one of the best conserved remains of the Roman Empire in France. And even without any architectural or technical knowledge about aqueducts, the mere sight of this incredibly high and ancient construction is just staggering.