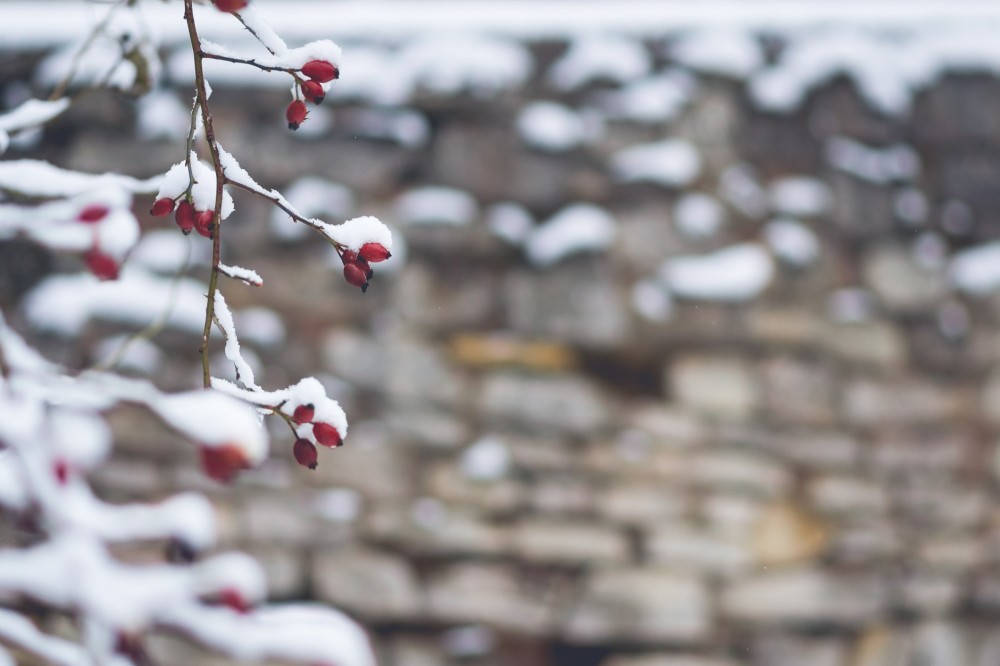 I feel like I start every other blog post I write during the months of November to February with complaining about the weather. I know, you are probably bored with it. But, you know, winters in Central Europe can be really tough sometimes. Before Christmas it is still somewhat easy to accept that colors, light, and warmth are gone for the next months, because at least you have the holidays to look forward to. January and February though are the months of waiting: For a hint of a blue sky, a ray of morning light on the bed sheets, for a day that you don’t regret leaving the house with just one pair of socks on. Winter months are always hard on me. Especially January and February. This year however, to keep my annual winter depression from kicking in, I decided that I needed to get out of the house more often — even if it is gray and freezing outside. For my own sanity, I need(ed) to take day trips around Germany to appreciate how different the country looks in the “dark season”. So this past January, I (finally!) explored a little more of Lower Saxony. Given I’ve been calling this northern German state home for longer than a year, I’ve actually seen quite little of it yet. I’ve taken advantage of big city vibes, latte art, and the airport in the close-by state capitol Hannover and I’ve spent some great days in the Hanseatic state enclaves of Hamburg and Bremen, but other than that I hadn’t seen too much yet.

In the last weeks though, I could cross two items off of my Lower Saxony bucket list. And I also had a few good reasons to take my camera out in my current home town Göttingen — which, I know, is totally not one of Germany’s touristic hot spots, but it’s really cute and medieval and full of (international) students and not as tiny as it seems. Plus, revisiting the 11th century castle a few minutes outside of town after a night with tons of fresh snow definitely made me fall in love with this region of Germany again. Castle walls, snow, and a hint of red!

Besides home town explorations in Göttingen, I also visited Hildesheim for the very first time. Also, not the kind of city that rings a bell for most people I assume, but it’s actually a crazy important city for medieval art history and paleography.

In my utter geekiness, I attended a class in medieval paleography this winter and you wouldn’t even believe how excited I get knowing that I can actually read Latin stone inscriptions from the 13th century now (I think). The trip to Hildesheim two weeks ago was actually a field trip with my paleography class, and I was glad I finally had a reason to go there — and call it work! Now, Hildesheim is not the classical medieval gem city, because (like many other German cities) it was basically bombed to the ground in World War II. My photos from those pretty half-timbered houses along a narrow cobbled street in fact show the only pretty old street that Hildesheim still has left (so I was told). Luckily, the biggest treasures for medieval geeks were kept safe inside of Hildesheim’s churches. I’ve been wanting to visit the famous Cathedral of the Assumption of Mary in Hildesheim for ages now and thus everything on our itinerary was right up my alley. My personal highlight however was seeing a medieval library that was used as a monastery library even before the church underneath and around it was built. Usually, this room is inaccessible, but since my paleography teacher knows a lot of important people we were lucky enough to get inside. As a lover of libraries and medieval monasteries I couldn’t have been more thrilled to see a real medieval library for the first time! Can you please imagine me working in this medieval library? Hildesheim’s newly renovated cathedral gives such a great impression of what a Romanesque church must have looked like in the middle ages! Also, how gorgeous are the wooden wheel chandeliers? (There are actually only four Romanesque chandeliers left, and Hildesheim has two!) The famous Bernward Doors are an early 11th century masterpiece that I first heard about in my very first art history lecture at university: These bronze doors which also are a UNESCO World Cultural Heritage depict scenes from the Genesis and the Life of Christ in a one of a kind iconography. The trip to Hildesheim definitely satisfied the middle ages nerd in me, and I already can’t wait to go back, because there is still so much more medieval awesomeness to be seen there.

My second January day trip however was a bit further away from civilization: It took me to the largest lake in Northwestern Germany, a lake is actually so huge you don’t see the opposite shore which is most likely one of the reasons its German name is Steinhuder Meer — the Sea of Steinhude. The lake is a recreational spot with lots and lots of rental apartments, boat tours, and restaurants. Everything spoke of how much national tourism this region has. Just not in the depth of January in the middle of a snow storm. Okay, so I had a feeling that the sandy beaches on the lake’s huge “bathing island” would probably deserted in January, but as my boyfriend Steffen and I sat on the train to the village of Wunstorf (from where we had to take to bus to the lake), it suddenly started snowing like crazy. When we arrived in the recreational little village of Steinhude with farms and red-brick houses that reminded me so much of Holland and Belgium, it was all covered under a white blanket. What sounds pretty was actually rather scary, because all the houses were deserted, all the restaurants were closed and the furniture was hidden under large blankets. There rarely was a soul on the streets, although everything told us of how lively this place must be during the summer months. It was so quiet and empty that we started joking that it seemed like we were only a few hours away from a zombie apocalypse. But somehow, the emptiness made it even prettier. Although a little scary, it is an interesting feeling to see a deserted playground on frozen sand in the middle of a blizzard. If anything, the sea/lake in January was an interesting photography challenge: Not only was it too easy finding catchy motifs in this literal sea of gray, but also my fingers were basically purple at one point and my camera was soaked with wet snow. Still though, I like the photos I came home with, because the aesthetics are so different from what I usually shoot. As it tuns out, Lower Saxony is not too bad in winter: As long as I challenge myself to take my camera with me to find new things to photograph among all that gray, and as long I explore new cultural heritage sites, I might be able to keep myself from this annual winter depression. Although, I can’t deny that I’m so looking forward to spring!

What did you explore in January?

PS: If you want to see more of German winter prettiness, castles, and half-timbered houses, follow @JulikaSarah on Instagram!