How To Cope with Europe in the Rain

Home » Specials » How To Cope with Europe in the Rain 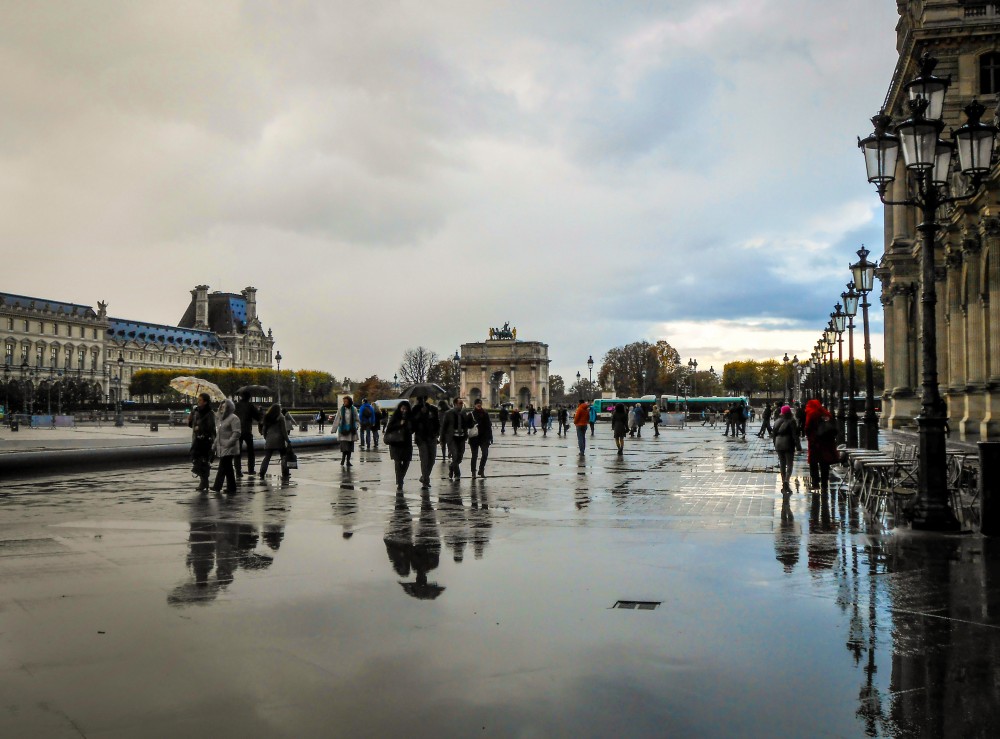 How To Cope with Europe in the Rain

I love living and traveling in Europe. But to be honest, when it comes to weather — Central Europe is not the Caribbean or South America. You can never really rely on the weather.

Especially during transition seasons it is really tricky to pack for traveling around Europe. And I have seen way too many girls traveling in ballet flats when it was freezing outside, and way too many guys bringing only shorts to a Euro trip in September. September is still supposed to be summery in Central Europe, right?

The weather in countries like Holland, Switzerland, Germany, Austria, Belgium, France, Czech Republic, and many other of the highly frequented destinations of Central Europe follows zero logic. Of course there are actual seasons, but the weather doesn’t always stick to them: Sometimes it will be so hot in March that you would already get severe sunburns, sometimes it will 9 degrees in August and summer refuses to make an appearance at all. The harbor of Rotterdam, Holland, in the rain

But if you have little experience with Central European weather you might ask yourself the following questions: How to pack for a possibly rainy vacation in Europe? How to prepare for Europe in the rain? How to cope with rain and unexpected cold weather? Strasbourg, France, in the rain

I’ve made many packing mistakes by just hoping weather wouldn’t let me down. But in fact, I’ve been rained on in most European countries I ever visited. And while a short thunderstorm on a hot June day in Budapest can be wonderful, seven days of freezing rain in Holland in May are definitely not. So I’ve learned my lessons. Here is all I know about how to cope with Central Europe in the rain:

How to pack for (rainy) Central Europe

Weather is simply unpredictable in Central Europe, and the weather forecast isn’t a reliable source. This is especially true for coastal places where the weather changes incredibly fast. Of course, you knew that already, but when I say coastal places in Central Europe I talk about cities like famous Bruges or Amsterdam — in both of these cites I experienced the most outrageously sudden weather changes (and got soaked to the bone!). So, be prepared! Bruges, Belgium, in the rain

I always pack after the “onion principle”: The more layers, the better. With a few tops that you can possibly wear on top of each other, and a cardigan or a chambray plus a proper (waterproof) jacket, you will be quite well prepared — no matter during what season you’re traveling.

When visiting Europe from October to April, it might be smart to bring boots. I have some simple black boots that go with a skirt or with jeans — and I can wear up to three pairs of socks in them. I know it sounds frustrating to bring boots somewhere in early September, but when I was in Prague last year I was so glad I did, because it was freezing cold! Plus, European ladies like to wear boots (in Paris I saw girls combining summer dresses with ankle boots in June!) — so you’ll blend right in. My look for Prague, Czech Republic, in the rain: Boots and colorful umbrella

If you can’t squeeze boots into your suitcase, at least bring an extra fluffy pair of socks — cold wet feet are the worst. Also, pack tights you can wear underneath your jeans. (Especially when you plan to visit Christmas markets in wintertime! My usual Christmas market look is two pair of tights underneath my jeans, plus an extra pair of socks. I know it sounds ridiculous, but trust me, it’s absolutely necessary.) And if you can, bring an umbrella — even if you only end up using it as a parasol. An umbrella is the smartest thing to pack, and I learned this the hard way. If you can handle a backpacker plastic raincoat thingy that would work too of course, but a colorful umbrella looks just so much better in photos!

What to do when it rains

Well, actually, rain is not all that bad in Central Europe, because most of the cultural institutions are inside: When it rains, flee into churches or museums or old-fashioned coffee houses — this is Europe at its best! Or what about going to the movies, or checking out an old book store? It might not be on the average touristy itinerary, but it’s a great way to get to know a country. However, rain becomes problematic when you are only somewhere for a short time and you really want to explore a lot without spending too much money on museums. In my experience though, walking tours take place no matter how bad the weather is — and waiting underneath the arches of the Louvre palace until the storm is over, or sharing your umbrella with someone (read: handsome stranger), is definitely is the quickest way to meet new people on the road. Paris, France, in the rain

If you want to stay dry, you could opt for the more comfortable ways of sightseeing: A bus tour or — a little more romantic — a boat tour on the river or the canals. Every bigger city in Europe offers boat tours and I really enjoy lazy sightseeing every once in a while — especially on rainy days! A boat tour in Utrecht, Holland, on a rainy day

And if you don’t what to spend that much money on touristy tours: Use regular public transportation! There is always at least one train/tram/streetcar/bus line that passes by most of the sights. Ask locals (hostel staff!) about the public transportation lines to see their city at its best — even though it rains.

How to cope with rain in Europe Utrecht, Holland, in the rain

However, I don’t only refer to these pragmatic aspects when saying Central Europe was made for rain, but also to aesthetic ones: Europe is famous for cobblestone streets — and nothing makes them shimmer more than rain. Actually, if you want to take a perfect shot of European cobbled lanes, pray it rains. Rain gives you so many options when it comes to photography: From beautiful puddle reflections to raindrops on windows. Cherish the opportunity to photograph Europe in the rain — with a special pretty twist. Raindrops and canals in Utrecht, Holland Raindrops on the window of a water taxi in Rotterdam, Holland Soaked flowers in a cloister in Utrecht, Holland Central Europe is beautiful in the rain, and if you dare to go out and take advantage of the weather, you won’t regret it: You will never see the Louvre courtyard as empty as on rainy November day. Nobody else will ever take that exact same photo of a random puddle reflection in Bruges. And post-rain clouds will always create the most spectacular once-in-a-lifetime sunsets. Capture them!

If your camera isn’t waterproof, improvise with a plastic bag from the grocery store with a lens hole in it — and you can be sure to take beautiful, surpassing, and very authentically European photos. Spotted on a rainy market day in Bruges, Belgium

And if all else fails: Find a window seat in a cute café, order a hot chocolate, and embrace the beauty of a rainy day in Europe. Because it’s not the rain that will spoil your time in Central Europe, but your attitude towards it.

Have you experienced Europe in the rain? How did you cope?