A Walk Around Berlin’s Famous Sights 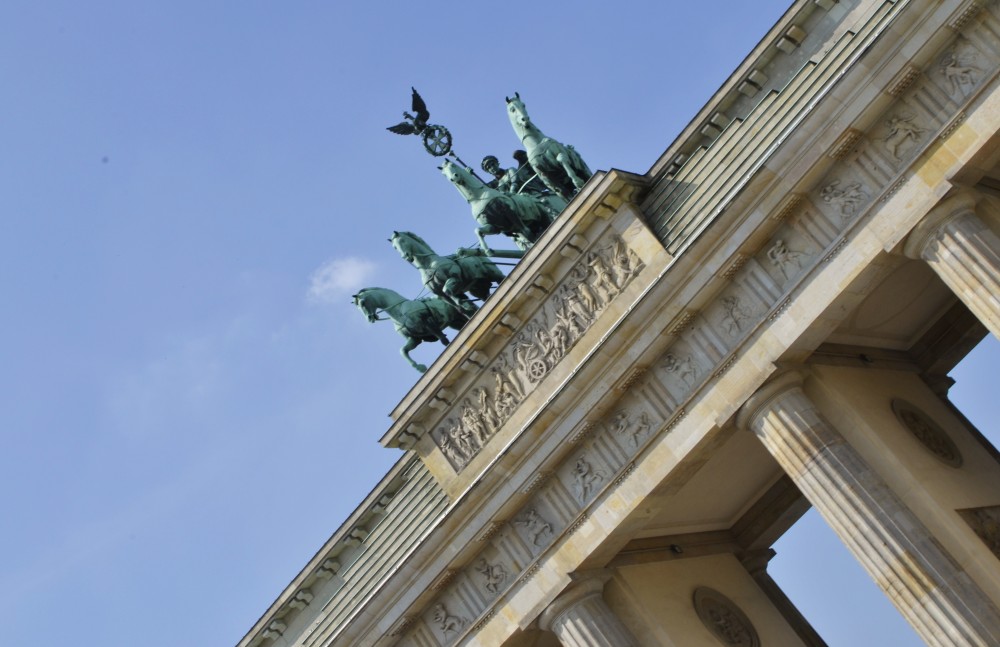 A Walk Around Berlin’s Famous Sights

When I got to Berlin last month I wanted to find art, design, and hipster subculture. But somehow I got distracted by classical, historical, and beautiful Berlin.

Berlin has experienced SO much history that you can’t possibly grasp it during just one weekend, probably not even in a lifetime. But I wanted to stroll through the streets and find “the real” Berlin. While walking through Berlin, my mind was racing with images I remember from history books and TV reports: Swinging Berlin in the 20ies, shockingly impressive Nazi parades through the city’s grand boulevards, entirely destroyed Berlin after the War. And then the GDR regime and finally the fall of the Berlin Wall. And although I was only two years old when the Wall was opened, the footage of young people in jeans jackets screaming “Wir sind das Volk” still gives me the chills. Not all of Berlin’s long history can be seen at first sight. The city has been rebuilt and has kept rebuilding itself throughout the decades. Among Germans, Berlin is even nicknamed ever-lasting construction site, because there are always huge new building projects going on somewhere. Passing by all the beautiful restored architecture, sometimes you would forget how this city was bombed during World War Two and how more than 90 percent of Berlin were destroyed. But no matter how Berlin struggled, it always changed and constantly reinvented itself. In my understanding of my country’s capital, this is the essence of Berlin. One little blog post could never fully convey how vast Berlin and its history are, but I still wanted to present a glimpse of the city with all the stunning architecture, the famous landmarks and I wanted to present the things you just have to see in Berlin — even if you’re only there for a very short time. Obviously, you would start at the famous Brandenburg Gate — one of the most iconic buildings in all of Germany. This triumphal arch has seen so much: Napoleon himself once stole the quadriga and the Berlin Wall was built right behind it. The Brandenburg Gate has experienced several Love Parades; countless demonstrations, New Year’s fireworks, soccer World Championship parties as well as Obama’s latest speech in Germany. The Brandenburg Gate is a symbol for Berlin’s and Germany’s ongoing history. Right next to the Brandenburg Gate is the Tiergarten (“animal garden”), a huge city park leading up to the victory column, the Siegessäule, which was built in the 19th century to celebrate Germany’s victory in the war against the Danes. One the right hand side of the Brandenburg Gate is the giant Reichstag building, where the German government sits. And similar to all the other sights of Berlin this government building has been destroyed and rebuilt more than once. But even after wars and fires this mighty neoclassical building kept its stunning old look — besides the massive modern glass dome, of course. On the other side of the Brandenburg Gate lies one of Berlin’s most depressing, thought-provoking sights — and it is a real challenge to describe it accurately. The Memorial to the Murdered Jews of Europe is a large field with concrete steles on it that all have a different height. In the beginning the steles are only knee-high, but as you start to walk into the sea of steles, they start growing high over your head. Although it didn’t look like that at first, the floor starts sinking and the steles grow higher and higher — until you are swallowed. With noticing it, you suddenly feel like drowning in grey concrete, you lose your orientation, you struggle with finding a way out. Although the artist who came up with this memorial never gave an explanation of his original intention, it is this feeling of being sucked into something dangerous that quickly grows over your head that might have been his aim. Many Germans in the time during the Nazi regime used similar ways to express that they didn’t know what was really going on. All of a sudden they were in the middle of something and didn’t know a way out.

At the same time the steles could be and an abstract version of tombstones to remind the visitors how many people had to die in the time of the Nazi regime. No matter which interpretation one prefers, it is an overwhelming place in every possible sense. Even on this insanely hot summer day in Berlin it was cold and gloomy in the center of the field of steles. The typical Berlin dichotomies between gruesome historical events, the beauty of architecture, and the city’s way of humorously reflecting its own history continues as you keep walking. You pass by the only real Nazi building that wasn’t destroyed during the bombings and which ironically nowadays is the German department of finances. Behind this huge office building you would find pieces of the Berlin Wall, but across the street are souvenir shops full of pseudo-Soviet kitsch and Currywurst fast food restaurants. These shops lead up to Checkpoint Charlie, the very spot where World War Three was closer to happening than ever: Right here American and Soviet armor stood across each other for hours causing an unbearably horrible suspense whether the next World War was about to happen or not. Luckily it didn’t happen, but Checkpoint Charlie became famous and gives vendors the possibility to make use of the weird Soviet and GDR nostalgia. From Checkpoint Charlie it is only a short walk to the Gendarmenmarkt, which is Berlin’s most beautiful place and the architectural reminder of French Huguenots coming to Berlin and getting culturally immersed well — just like the word Gendarmenmarkt derives from the French word gendarmerie. But right next to this place of cultural integration you will find the Bebelplatz, where one of the first significant Nazi cruelties happened: The burning of “un-German” books in 1933. Significant because — as the famous German author Heinrich Heine once said (a century before the Nazi regime!) — where books are burned, people will be burned too. At this very spot the disaster started to take its horrifying course. Sadly, Bebelplatz is the place right before the law department of the renowned Humbolt University. Although 29 Nobel Prize winners (Albert Einstein himself!) went to school here, this place of education and humanity could still become a place of hatred. Today, an installation of empty bookshelves underneath the place reminds of all the lost cultural treasures. A stone’s throw from the Humbolt University you will find one of Berlin’s renowned cultural highlights which is a UNESCO Site too: The Museumsinsel, the museum island. Yes, an island where one museum is located next to the other. From dinosaur skeletons to the world-famous ancient Pergamon Altar, there is nothing you can’t find in Berlin’s huge museum scene. Even if you don’t manage to see all museums (granted, it’s almost humanly impossible), to know you’re surrounded by so much art and culture is a great feeling already. Plus: The architecture on the museum island is stunning, which makes it the perfect place for an extended stroll. Or well, a jump into a fountain in front of the massive Baroque cathedral of Berlin during a summer heat wave in the city. Where destruction and beauty coexist. Where history can be sensed everywhere. Where crying and laughing are as closely intertwined as they can be. Where you are awe-struck in every possible way. Where ugliness is a part of beauty. Where you can’t leave unimpressed. This is where I found Berlin. Have you been to Berlin? How did you experience it?

PS: I visited most of these sights with the New Berlin Free Walking Tour, which was an excellent way to learn more about Berlin’s history and architecture. The walking tour takes place two times each (!) day and is offered in English, German, and Spanish. (Please note: I’m not being paid to write this, I just really love Sandeman’s New Europe Walking Tours!)