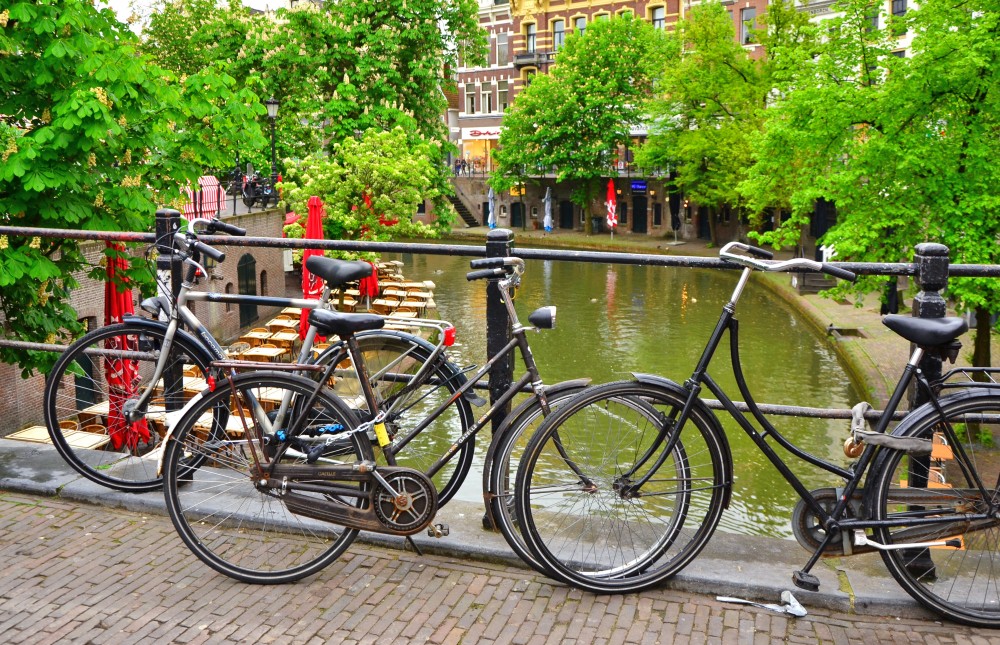 I knew I would like Utrecht. My little sister has been there a few years ago and said it was like a mini Amsterdam. When I visited Amsterdam a while back, the city and I didn’t really connect. I mean — I had a great time in Amsterdam, I liked the pretty canals and enjoyed the cliché touristy stuff like visiting the Heineken Brewery. But somehow, Amsterdam felt too crowded, too crammed with the typical let’s-get-high-and-see-prostitutes-tourists. So to me, a picturesque mini version of Amsterdam sounded very promising. And Utrecht did not disappoint. Whereas Amsterdam has complex ring-like system of canals, Utrecht only has two canals: The old one and the new one — the Oude and the Nieuwe Gracht, as easy as that. Along the canals you can find everything you ever imagined Holland to look like — an endless abundance of bikes, pancake restaurants and blooming chestnut trees. The city of Utrecht is small compared to the bigger Dutch cities and seemed almost untouched by international tourism. There were only two ladies who looked like the typical tourists and I kept seeing them over and over again — was this due to the enduring rain, or May not being peak season yet? I don’t know. But Utrecht felt authentic. And as Dutch as it could get. At one point I tried to take photos that didn’t have bikes in it for a change — but it was in vain. At second sight, there was always a bike somewhere. It was nearly impossible to escape this feature of Utrecht’s utter Dutchness. What I personally loved the most about Utrecht is — who would have guessed that — the city’s medieval history, which is still to be seen in Utrecht’s most famous landmark the cathedral’s tower, or Domtoren. The main church of Utrecht has existed in that very same spot since the 7th century, but storms and fires destroyed it with uncanny regularity. What can be seen today, is only partly originally Gothic from the 13th century. In 1674, St. Martin’s main nave collapsed during a horrible storm and left the tower standing unattached to the rest of the church. Although a tower standing alone as a campanile — like the famous bell tower of Pisa in Italy — is not unheard of in art history, a lonely tower because of a storm was a new and powerful experience for me. The cathedral tower is still the highest church tower in the Netherlands and it can be seen from almost everywhere in the city center. So yes, I knew I would like Utrecht. How could I not like it? It was everything I dreamt a city break in Holland to be like: Utrecht has canals and cafés, an exciting history and a medieval cathedral with a beautiful cloister, as well as bikes, brick houses and bridges. I will give Amsterdam another chance in the future — but then I will also definitely get on the train to Utrecht (it only takes 30 minutes!), because this little city is the perfect day trip from Amsterdam. Utrecht is essentially Dutch, beautiful and feels like an untouched gem. Have you heard of Utrecht?

Note: I was a guest of the Utrecht Tourism Board. However, all photos and opinions are my own.