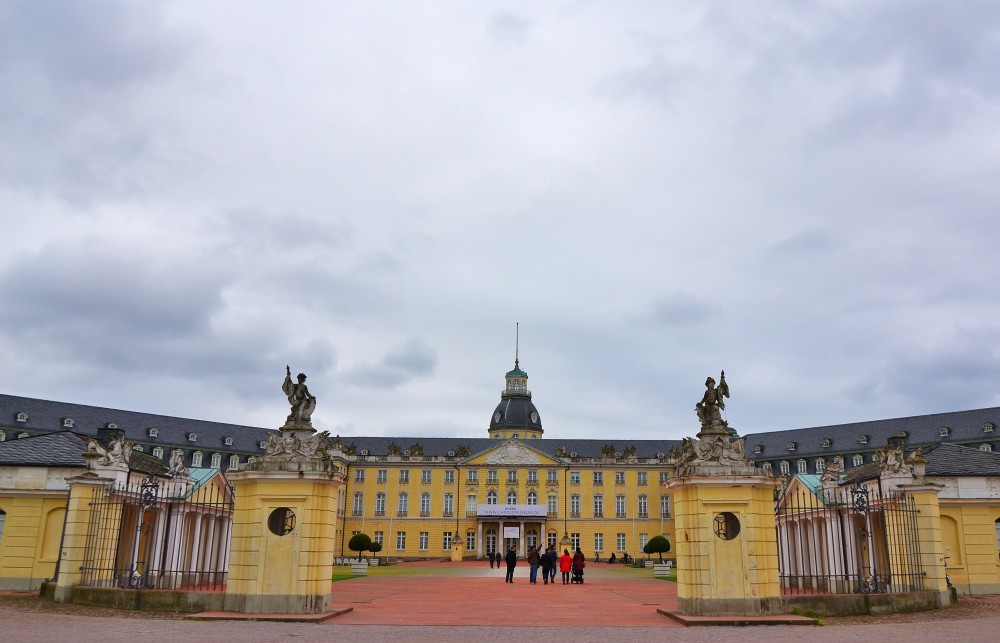 To be honest, Baroque is so NOT my favorite art historical epoch. Baroque paintings are just heavy fabrics, surreal clouds, intense colors, and full cleavages. Baroque architecture is full of patterned marble and fat gold baby angels. For me, Baroque is simply always over the top. Although I love churches and could usually stay for hours, Baroque churches have the tendency to scare me away after a few minutes, because it’s just too much gold and kitsch for my eyes.

But there is one exception to my Baroque aversion: Castles and palaces! Castles are allowed to have a lot of gold and fancy Italian marble. And since Baroque architecture evolved out of classical Renaissance architecture, the castles tend to be way more symmetrical than those chaotic, overload Baroque paintings full of naked chubby flesh. One of Germany’s most beautiful Baroque palaces can be found in the city of Karlsruhe, the second biggest city in the state of Baden-Würtemberg. Similar to world-famous Versailles, the city of Karlsruhe was planned around the nobleman’s palace with streets leading up to it like sunrays. Hence, Karlsruhe and the palace’s original history are inseparable.

Sadly, the palace’s interior was destroyed during World War II,
but it’s nowadays used as a modern museum on regional art and history. (Almost) all roads in Karlsruhe lead to the palace — Baroque urban planning!

Despite my art historical interest in Karlsruhe, I’m also emotionally attached to the cities in the state of Baden-Würtemberg. I’ve moved around a lot in my life, but I was born in Baden-Würtemberg. Until today, the dialects and the food of Southern Germany feel like home to me. Normally, I don’t like the word “home”. I don’t have a certain location I could really apply it to. But a bite of a Southern German pretzel with butter — that’s the taste of home for me.

A lot of people think that all of Germany is famous for pretzels, but it’s only the bakers in South of Germany who know how to do them right. As soon as you cross the borders of Baden-Würtemberg and Bavaria in the north, the pretzels get crappy. And as a current expat in the crappy-pretzels-part of Germany I always get super excited to cross the “pretzel border” again — to reminisce the tastes of my childhood in Southern Germany. The beautiful park surrounding the palace of Karlsruhe is one of the Baroque features I really loved about it. (And, no, I don’t have any photos of pretzels — I was too busy eating them all) The prospect of eating real pretzels was one of the many reasons why I was thrilled when Alex, the coolest Texan expat in Germany, invited Ashley and me to come visit her in Karlsruhe while we were in the area (read: Alsace in France, which is pretty much around the corner). Together we indulged in everything delicious the region has to offer: Beer, obviously; pretzles, obviously; Maultaschen and my personal favorite: Spätzle! Spätzle are a traditional Southern German kind of homemade thick pasta, usually served with gravy or with cheese and fried onions on top. So good! Käsespätzle — thick pasta with cheese and fried onions — my favorite Southern German dish (and by the way also the only traditional German dish that is vegetarian!)

Unfortunately, the weather wasn’t on our side so we couldn’t hang out at the stunning park behind Karlsruhe’s palace, but let’s just say — Alex and her friends found other ways to introduce Ashley and me to the fun life in Karlsruhe… Photographic proof of our spectacular night out in Karlsruhe: Alex, me, Ashley

I was happy I had a reason to visit pretzel-land again and I was glad to find out that the Baroque epoch also had some positive sides to it: The creation of gorgeous palaces with huge parks in cities that I always love to return to!

Have you heard of Karlsruhe, its Baroque palace,
or the (imaginative) “pretzel border” before?

Thanks again to Alex for hosting us and showing us such an amazing time in beautiful Karlsruhe!