Photo Essay: The Windows of St. Vitus Cathedral in Prague 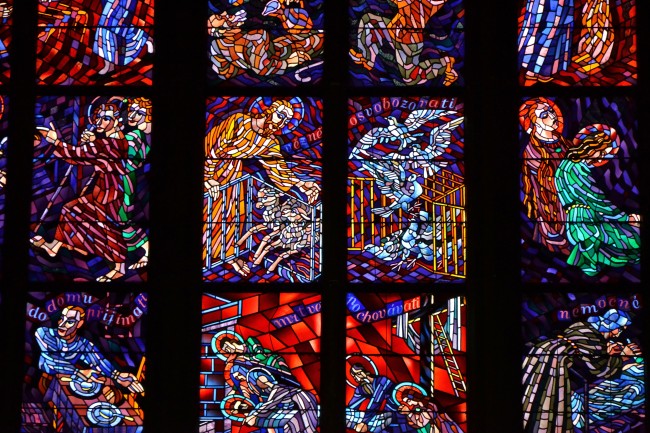 Photo Essay: The Windows of St. Vitus Cathedral in Prague

It’s no secret that my favorite art historical period is the Middle Ages. I really can’t tell you how that happened (it is a quirky favorite period after all), but I’m pretty sure it had something to do with Gothic cathedrals.

These gigantic churches that were built as high as possible without any help of cranes or measurement technologies. All the builders wanted, was to praise God with sanctuaries that were symbols for a heavenly afterlife. And now, almost thousand years later, some of these churches still stand. They survived depredations and sometimes even bombs. Although our modern world can build higher and faster, no one can deny this overwhelming feeling when you enter a Gothic cathedral: A chill that runs down your spine emerging from the awe these majestic buildings evoke.

This feeling is not only caused by knowing how old these cathedrals are, or by realizing how insane it must have been to spend hundreds of years building it, or by the astonishing details of the architecture, but for the most part, by the magical light. Gothic cathedrals are about the unearthly colorful light that turns a stone building into a divine one.

And although the windows in the St. Vitus Cathedral in Prague are not entirely original medieval stained glass windows, the restorers were wise enough to keep the colors as a central element of the windows. And the play of colors on the Gothic walls of St. Vitus were the most beautiful I have ever seen.

I don’t think I would usually belong on a Picturesque Monday photo, but I love this picture Steffen took of me gazing at the gorgeous windows so much that I just had to include it here. Aren’t these windows just breathtaking? PS: I wanted to thank Mariella, Ninasafiri, and Jessica for nominating Sateless Suitcase for the Liebster Blog Award. I appreciate it so much! Unfortunately, due to the reasons I explained in my previous post, I don’t have the time to participate. I really hope you’ll understand. Thanks again, ladies!