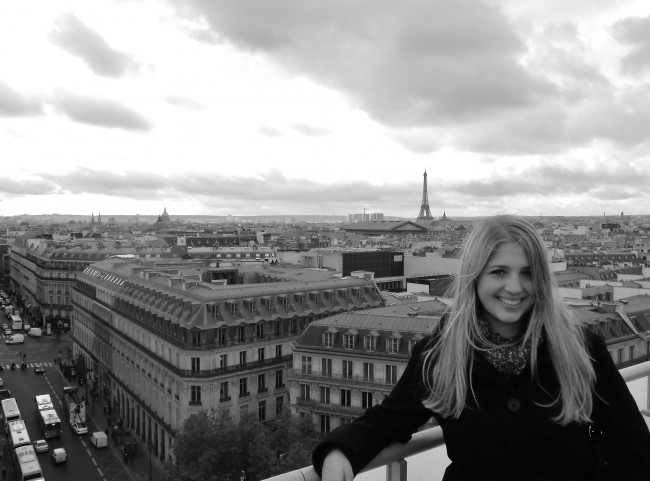 I love “taking advantage” of my friends. This year, I was already hosted by Sarah in London and Kathi in Munich. I admit, I was cadging a little. But I can’t help having cool friends, who live cool places — I just have to go stay with them as soon as they invite me over!

And again, one of those globetrotter friends of mine moved to one of the prettiest cities in Europe recently — and I didn’t hesitate for a second when Janina invited me to come to Paris last week! While I’m medieval art historian nerd, Janina studies archeology and Egyptology and also regularly participates in excavations in exotic places like Azerbaijan. (Ever since she started studying, I kept calling her Indiana Jones. Really, she is the female version. Minus the whip. I think.) Together, we make a pretty nerdy team.

Anyways, since I was advocating studying abroad so vehemently, Janina applied for a semester in France, got offered a college place in Paris and moved there three weeks ago. I guess, she sort of HAD TO invite me, because I was the origin of her Erasmus program application… and just like that I was off to explore Paris in November!

After discovering bus travel as a cheap and easy alternative to get around in Europe earlier this year, I spontaneously booked my ticket with EuroLines only four days in advance. Flying or taking the train would have been super expensive on such short notice, but going by bus I only paid 75 Euros for a return ticket from Cologne to Paris! Janina lives in a perfectly located apartment with a French painter and her two daughters, and I simply loved glimpsing behind the façades of the typical Parisian houses. Since my last visit to Paris 6 years ago was the standardized tourist perception of the city of lights, I was excited about authentically rediscovering Paris: Getting to know more about the French lifestyle, having a more genuine experience and, of course, falling in love with the city all over again. I wanted to indulge in more culture, art, food and atmosphere this time, instead of hurrying from the Eiffel Tower to the Louvre without taking a break and reflecting on what I was seeing…

These are my highlights from my fabulous (tough slightly nerdy) weekend in Paris: Pain au chocolat for breakfast — eating out in Paris is almost unaffordable, but having a delicious breakfast at a boulangerie was even within my price range. While sitting in the scent of fresh baked croissants and baguettes a warm pain au chocolat tastes even three times as good! I pretty much ate my way through all the inexpensive goodies Paris has to offer — macarons, éclairs, crêpes — but what I definitely liked best was my falafel in the Jewish Quarter Marais. I always love a dish that comes vegetarian in its natural form, but the fallafel at L’As du Falafel was so diversified and spicy – a total enlightenment!

Paris was one of the most important cities of late medieval art production. So, throughout the last years of studying art history I collected several things I really should see in Paris as soon as I got to go back there. Musée du Moyen Âge de Cluny — the museum exhibiting the most famous profane tapestry series “The Lady and the Unicorn” and is home to one of the rare romance ivory caskets, which I absolutely adore! I nearly cried when I finally saw one of my beloved ivory caskets “live” for the first time. Sainte-Chapelle — the fantastic Gothic chapel in the Palais de Justice where the walls are completely substituted through stained glass windows. Sainte-Chapelle is the epitome of Gothic architecture and so breathtakingly beautiful that Janina almost had to drag me out of there eventually… But besides the medieval art, I also fell hard for the hip Paris street art. I had so much fun discovering a new stencil literally behind every street corner in Montmatre and Marais – another major art experience in Paris!

Drinking my huge serving of café au lait out of a bol. I never did that before and was pretty proud of myself that I didn’t spill anything. Living in a real French apartment, where the toilet is a sort of a small booth in the the kitchen without a washing sink close-by. Although I did obviously not understand this, it appears to very French. Besides that, I loved saying Bonjour to the neighbors we met on the staircase and being called mademoiselle by salesmen… Spending the Sunday afternoon on the steps of Sacré Cœur. Although this place is swamped with tourists, the atmosphere was beyond comparison — sunshine, live music, lots of people to watch and a great view over the city. All in all, I learned that Paris is a wonderful year-round destination — and that it most certainly is one of those places where you could repeatedly return to and always discover something new to fall in love with! Thanks again to Janina for hosting me and being my insider city guide!