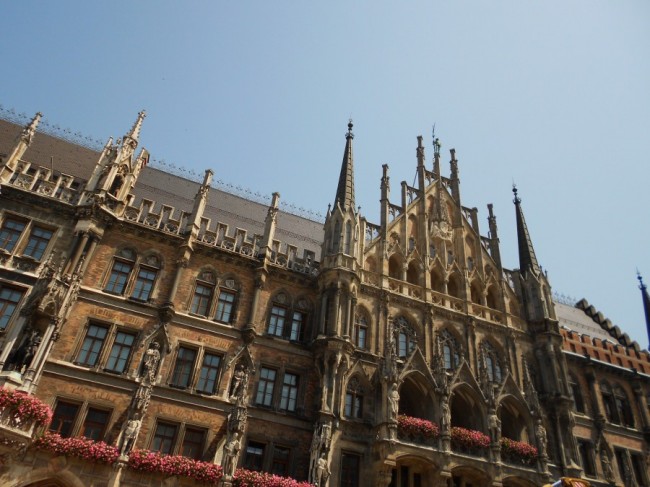 25. That is HUGE. Very grown up. A quarter century! I really wanted to do something special for this occasion – which included being as far away from my ugly-passing-through home town Siegen as possible!

Luckily, my wonderful friend Kathi invited me to stay with her in June 2012. I had met her during my semester abroad in Lisbon, where we became friends quickly and also went on several trips together. Kathi lives in the city center of Munich – and I couldn’t wait to finally come back to Munich at last! To get there, I used Mitfahrgelegenheit which is a platform arranging cheap rides offered by people who still have free seats in their cars on their trips all over Germany. It’s pretty much like safe organized hitch hiking and just perfect to get around easily and on the cheap in Germany (and Europe, too!).

My first whole day, after my late night arrival, happened to be the hottest Munich’s had so far this year. Nonetheless, we decided on a decent tourist itinerary: As recommended by AdventurousKate, we took part in the free (!) walking tour by Sandeman’s New Europe Tours.

The tour appeared to be totally worth it – even Kathi, who has been living in Munich for quite a few years by now, learned so much about her city that she was completely astonished from time to time. The tour started in front of the gorgeous town hall, where we watched the famous Glockenspiel. I just loved the Neo-Gothic town hall building… it’s so filigree and detailed. It’s style-related to “pseudo-medieval” buildings like the Houses of Parliament in London, because it was one of 19. century’s favorite styles for churches and official houses – referring back to the breathtaking cathedrals in the middle ages… (which I, of course, also love dearly!) From there, we went to see the Frauenkirche, one of Munich’s world-famous landmarks and as well a wonderful church. Our tour guide told the lurid story about how the church was apparently built by the devil himself… In general, the stories we were told all seemed kind of unbelievable and beer-oriented. As one of the very few Germans on the tour we suspected that fires in Munich weren’t probably all extinguished with beer… but it was definitely very entertaining to listen to them.

Further we visited the Viktualienmarkt, a market in the city center, which is all about hearty Bavarian food and beer. Next stop from there, of course, was the Hofbräuhaus, which is a giant tourist magnet. Kathi said she barely knows any people living in Munich who would go there for a drink, because it’s annoyingly crowded, loud and super expensive. Nonetheless, it was worth a short glimpse inside: After the tour, we spent this incredibly hot day in the Englischen Garten. And I was completely overwhelmed by its beauty and wonderful atmosphere… The park was full of pretty people tanning, swimming in the Eisbach, and playing ball games. I could have lazed there forever watching the fancy people of Munich’s upper class and the athletic shirtless guys playing volleyball… The Englische Garten really is the heart of Munich, preserving the city with Germany’s highest quality of life! After getting sunburned (shame on me for underestimating Bavarian sun!) we started planning our night out in Munich. And although I had been to Bavaria before and learned to love its renowned Biergärten, there was one crucial thing about them that I didn’t know so far: A Biergarten is only allowed to call itself a Biergarten, if the costumers can bring their own food!

So, we started preparing a huge dinner including delicious salads and a selfmade Bavarian cheese cream called Obatzda. I made and ate it for the first time in my life, but it was soo good that I won’t be abstaining from it any longer! The most perfect combination is a Bavaria Breze (Pretzel) with Obatzda and a cold beer… We had a fantastic evening at Max Emmanuel Biergarten, especially since we were meeting up with more friends from our semester in Portugal. Great local food and great local beer on a hot summer night with friends – is there a better way to spend your birthday weekend?

And of course I had to capture this with a mandatory Bavarian tourist picture  – a photo according to the cliché, but I loved every little second about this authentic Munich night out! My weekend in Munich was just amazing, so much fun, enriching for the art historian in me (Alte Pinakothek!), and I really loved seeing Kathi again after such a long time…

Munich is such a gorgeous city! If you get a chance, go there! If you have been, it gets even better the second time around, I promise!