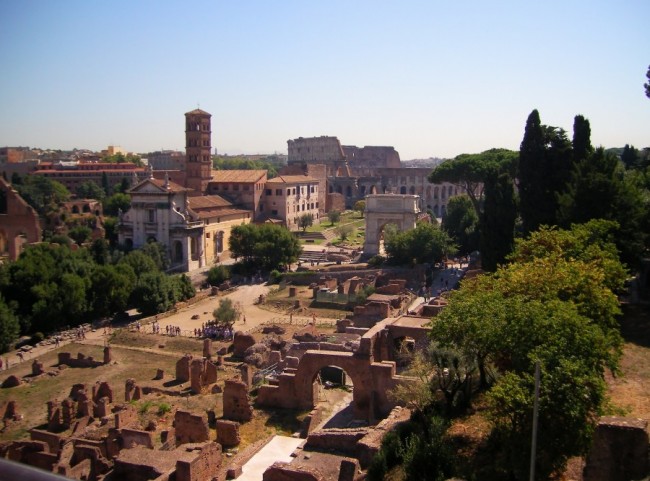 A little flashback – The trip to Italy was planned by my school as a senior field trip with my art class in September 2006. Art was my major in high school, and I just couldn’t wait to go to Rome to spend one whole week full of visiting churches, museums, palaces, and gardens in Italy’s ancient capital.

I mean, how could I attempt to be an art historian and not be beyond excited about going to Rome?

My teacher took her job seriously, and I am pretty sure that we have seen basically everything of art historical relevance in Rome. Of course, when we weren’t listening to guides, giving presentations (try that in front of the Trevi fountain, or in an very silent uptight catholic church!), sketching our architectural observations, we were behaving like all the other travelers… or posing on top of the Spanish Steps.

But since Rome is one of those cities where you usually have already seen every major sight in every possible media, let me give you my five favorite shots of Rome, which maybe are at least a little less typical and show you Rome with a little twist.

The center of ancient Rome still is one of the most worth seeing sights today – if you want to understand any European architecture for the next 2000 years, you have to understand these Roman buildings first… But besides admiring and studying architecture and sculpture on the spot, you also just take them home with you as miniatures. This former temple has been a scared place for Rome and its inhabitants ever since it was built. Turned into a Catholic church after Rome’s Christianization, it became one of the city’s most crucial sights, because of its rare architectural appearance and being a sepulcher to Italy’s most important people. Since the church is mostly lit from the hole in the dome, stepping out of this dim spiritual sanctuary into the broad Italian sunlight, is almost as magical as the interior. Two nuns walking out of the Pantheon

The Fontana di Trevi is apparently the most romantic spot in Rome: In the orangey golden light of the city’s street lamps at a warm summer evening one can easily fall in love gazing at the absurdly blue water and listening to the characteristically sounds of the fountain.

Legend has it that when you throw a coin into this fountain you will return to Rome. Throw in two and you will fall in love with a Roman man, three and you will even marry one. In reality however, the fountain is sieged by loud tourists, sneaky pickpockets, and brash rose sellers. If you want to go there for romantic purposes, come very late at night to at least be able to understand what your partner is saying  – and of course, to have a decent chance to truly admire this one of a kind 18th century architecture-sculpture-combination. The reality of visiting the Trevi fountain in the peak season

I just loved passing by random streets full of parked cars, construction sights, and trash cans – and suddenly discover that this unspectacular street opens a view to one of the oldest, most amazing buildings in the city. This happened to me I in Rome all the time… it’s the things you don’t expect that astonish you the most: I was waiting my whole life to see the Sistine Chapel, but in the end it was not nearly half as life-changingly touching as the little 5thcentury church Santa Sabina all’Aventino. This church is one of the very first Christian ones, and thus combines the majesty of antique architecture with the modesty of Christian spirituality that I had goose bums the whole time – in the middle of an Italian late summer heat wave! I guess it’s just true: The Roman people love their Vespas, and they do drive like crazy. One could assume that honking is way more essential for their driving style than braking. But this adds up so much more to the pleasurable atmosphere of the eternal city that you couldn’t imagine it without millions of scooters. And in the way those are parked sometimes they literally offer the city a medium to reflect and shine even brighter. The vespas of Rome – Truly Italian!